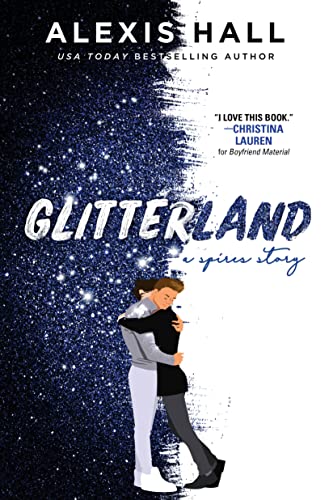 “Ash is such a compelling, if disturbing, character, and Hall’s writing is so eloquent that Glitterland is more substantial than the usual gay romcom.”

Glitterland’s Alisdair Ashley Winters is an unlikely hero for a romantic comedy. When he can pull himself together, he writes mystery novels. Most of the time, he hides in his apartment, awaiting the next manic episode or depression. Organizing a trip beyond his front door requires enormous effort. Ash (an appropriate nickname), always dresses in drab, dark clothes, perfect attire for such a fearful, miserable person.

If Ash does summon the courage to go out, his snarky cynicism keeps people at arm’s length. Communicating with people is such hard work. His only companions are a small group of old friends from Oxford. Niall, one friend and ex-lover, sees himself as caregiver to a basket case whom he continues to love. Ash calls on Niall at moments of crisis but doesn’t love him. Can someone so trapped inside himself ever love anybody?

This is a romantic comedy so there will be an unlikely Prince Charming to break through the wall of Ash’s solipsism. When Ash manages to muster the courage to attend the bachelor party of an Oxford friend, being held in a Brighton gay bar, he meets his opposite, Darian Taylor. Darian is as flamboyant and exuberant as Ash is drab and depressed. Ash is a posh Oxonian: Darian a working-class high school dropout with a thick regional accent. Ash broods and writes; Darian aspires to be a model. Ash’s sartorial style is funereal; Darian’s is gaudy. Somehow, these two end up having sex on the floor of a Brighton flat. Ash wakes up in the midst of a grand panic attack and calls on old reliable Niall to drive him back to his safe(r) London home.

Flash forward to a book signing in London. Darian has come to get his copy of Ash’s book autographed. The reunion leads to more wonderful sex, which only leads Ash down a rabbithole of confusion. Feeling something for someone else is terrifying but liberating. Ash’s newfound feelings lead him into bizarre new experiences, like acting as a runway model at the day-long Essex Fashion Week (jokes about Essex abound).

Ash feels relatively calm about meeting Darian’s grandmother and Essex friends, but has a meltdown when he tries to introduce Darian to his posh, snobbish friends at a Cambridge wedding. Panicked, Ash is gratuitously cruel, then incapable of summoning the courage to remedy the situation.

The torrid affair of a repressed Englishman or woman and a liberating, less educated or articulate working-class lover is a British literary cliché. What makes Glitterland unique is its vivid picture of a man whose entrapment in his own head can only be healed through liberating sex with his opposite. Hall’s Ash is almost poetic in his moments of crippling anxiety or despair. Darian is an explosion of enthusiasm, expressed in his Essex argot. Hall delineates two distinct voices and personalities.

As is often the case in romantic comedies, the denouement is not totally convincing. However, Ash is such a compelling, if disturbing, character, and Hall’s writing is so eloquent that Glitterland is more substantial than the usual gay romcom.