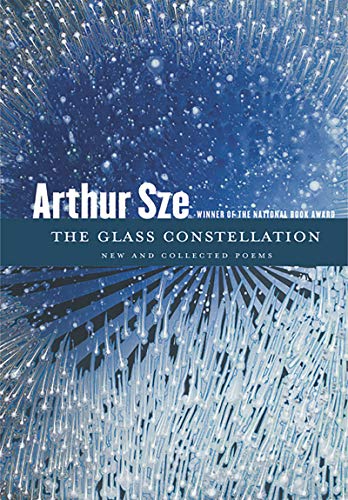 "Sometimes one fingers annihilation," he writes in a quiet moment of nuclear bombing, "before breaking into bliss."

It takes a lot of paper to print all of these poets.

Coming in at a whopping 560 pages, The Glass Constellation has, probably, every word in the English language—but, as usual, he's put them all in their right order. Recognition for Sze’s work has always felt a little overdue; the National Book Award was late to find him when it finally arrived only two years ago, and so much of the recognition he’s received in this last decade has been delivered breathlessly, as if one had just turned on the radio to hear Bob Dylan for the first time, or your friend excitedly telling you about having seen a play by Bill Shakespeare. Nevertheless, it feels good to see such a book released, and it is as satisfying to read as it is to hold: a weighty thing, substantial. It is rare one finds a book of poetry that they could, upon completion, easily use to bludgeon an enemy.

Ten other collections of poetry live here titivated by 26 new poems, all of them marked by the manners that have always permeated Sze’s work: Zen-like wonder at the tiniest of moments that invariably take strong left-turns into new worlds; heart transplants and small onions are kin, and country roads can lead to punk music concerts.

All of the Szes’ wonder at the world: the big of it, the small of it, the unexpected poetry in even the mundane, could fill a river to rush and then spill its banks, but if their riparian joys have any drawback, it is this: this is a book that allows no room for growth, spanning so much work and so much time and so many Arthur Szes that it could be confused with an autobiographical obituary, a last will and testament to the world. Has the pen run out of ink? Is the desk starting to wibble in its legs? Even at 560 pages, it feels like there might be more to say, more Arthur Szes to meet, worth waiting for, and to wait, as he writes in “The Unfolding Center,” “to wait is to ache, joy / despair, crave, fret, whirl, bloom, relax / at the unfolding center of emptiness. I tilt on the outgoing tide of my breath.”