Girls on Fire: A Novel 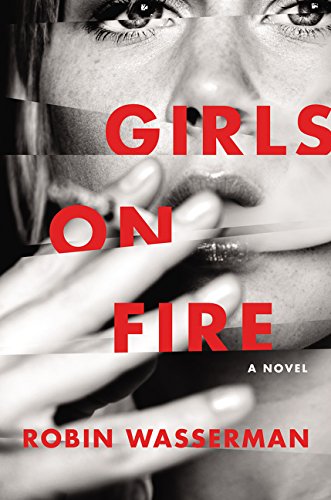 ANGST and DISPAIR, in all capitals, are clearly the driving forces behind Robin Wasserman’s latest novel, Girls on Fire.

Take three teenage girls—Hannah Dexter, Lacey Champlain, and Nikki Drummond; mix in parents with the collective parenting skills of a gnat; toss in a pinch of satanic worship and a dash of suicide, and you have the makings of a page turner.

But let’s not get too far ahead of ourselves. Hannah Dexter by all accounts is a teenager on the edge when she is humiliated by Nikki Drummond, Miss Popularity. Hannah is befriended by Lacey Champlain, a girl who dabbles in goth, and knows more than she should about most things “Nikki.” Hannah is absorbed into Lacey’s lifestyle and is reformed as “Dex.” Dex engages in her newfound routine with passion, much to the chagrin of her mother and the amusement of her father.

Through the first half of the story, Lacey nurtures a hatred for Nikki and ingrains it into Dex’s psyche. Dex is as pliable as silly-putty and easily succumbs to Lacey’s grasp. Lacey tells Dex of her previous relationship with Nikki, and how her hatred of this girl grew; Dex quickly falls into step with Lacey’s opinions.

Midway through the story, Dex and Lacey agree to attend a party in a house under foreclosure in the neighborhood, and Lacey does not show up. Dex throws herself into the fray of too much partying, with disastrous results. Lacey’s failure to show up at the party and save Dex from herself causes Dex to question their friendship. Unknown to Dex, Lacey’s mother and stepfather have committed her to Horizons —a religious cult camp where the rules are, at best, draconian.

During Lacey’s absence, Nikki—the girl hated by both Dex and Lacey—sees an opportunity and wheedles her way into Dex’s life with apologies and an invitation to be part of her in-crowd, gradually pulling Dex back into the world of Hannah. Unknown to Hannah, this is a planned move on Nikki’s part, with no friendship involved—just control and more planned humiliation.

Lacey returns several weeks later after a terrifying experience at Horizons and finagles her way back into Dex’s heart and away from Nikki. The complex relationships of the three girls—rife with secrets, anger, fear, and hatred—weave throughout their tormented lives to a disastrous ending.

Two underlying issues exist throughout the story: the suicide death of Craig Ellison, Nikki’s boyfriend, and the satanic practices of the children of Battle Creek. The question of Craig’s death rises to the surface as the book progresses, raising questions about how he really died, while the issue of satanic practices is mentioned throughout the story as religious leaders and families are exposed to graffiti and body art in the form of pentagrams and satanic writings. At the end of the book, the satanic side of the story rises to only minor proportions as an obvious tool on the part of dysfunctional teens to upset equally dysfunctional parents.

Every few chapters Wasserman takes the reader into another direction, away from the first person of the girls and into the third person authorial voice, presumably that of a mother. It’s not clear to this reader that such chapters are necessary to move the story forward. They just present more sorrow mixed with mothers disowning parenting responsibility. Dialogue is not chiefly relied upon as a tool to convey action or meaning in this story, but it is there and, as dialogue should, it moves the story forward and works toward developing character.

While Wasserman’s writing is strong and at times compelling to read, the language in both the dialogue and in the mind of the narrator is about as blue as it can get. The dysfunctional characters rely on epithets that may be indicative of today’s youth, but even the most seasoned reader can only take so many expressions of cunt, shit, dick, bitch, etc., before skimming entire paragraphs and skipping those words and perhaps losing the intense meaning of a scene. This is not to say the verbiage is not necessary to the development of a particular character or characters, it just gets tedious when it repeats and repeats on almost every page.

The ending is not satisfactory to a purist expecting a semblance of closure, but considering the topic of dysfunctional people, it is perhaps the only ending possible.