Girl Walks into a Bar . . .: Comedy Calamities, Dating Disasters, and a Midlife Miracle 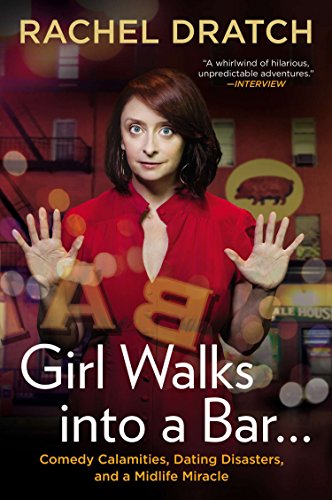 “Girl Walks into a Bar is a meditation on how life is defined in the aftermath of fame.”

“I was on Third Avenue in New York, emerging from the Starbucks.

“The stranger turned to his friend and nudged him. ‘You know who that is? SNL! SNL, man!’

“The friend gave a vague, fake nod of recognition. The stranger tried to convince his friend to be more excited.

“The friend looked down the street wanting to move on.

“‘Awww! I miss seeing you on TV! I never see you in movies or anything anymore!’ said the stranger.

So begins the prologue to Girl Walks into a Bar, the new memoir by Rachel Dratch, late of “Saturday Night Live” and almost of “30 Rock.” She’ll spend the rest of this wry and rueful book answering the question that echoes through the pages: What happened to you?!

As she puts it:

“This book starts off by talking about Showbiz for a while, but I assure you, it is actually not about Showbiz. It’s about Not Showbiz and what happened to my life when Not Showbiz became my un-chosen profession . . .”

Ms. Dratch rather famously un-chose showbiz itself when NBC network brass vetoed Tina Fey’s casting of her (fresh off seven years on SNL) in the part of Jenna, lead actress of “TGS,” the show-within-a-show, on “30 Rock.”

From there, as she tells us, her life became a mixture of Tivoed episodes of “Judge Mathis” and “Dr. Phil” (with whom she enjoys a love/hate relationship) and fielding calls from her agent that offered her the chance to audition for parts if she was willing to pay her own way to Los Angeles to test for them.

Or that’s what the book is about on the skin of it. Underneath, in its more vital organs, Girl Walks into a Bar is a meditation on how life is defined in the aftermath of fame. Or more to the point, during a hiatus from public life spent with your vision blurred by a combination of depression and fear, during which the guy on the street keeps asking you that same uncomprehending, embarrassing question: What happened to you?!

In spite of the fact that Ms. Dratch insists that her book is not about Showbiz—and, truthfully, it is not—she does spend a good half of the book ruminating about it, exploring the nearly overwhelming love/hate that she has for “the” business.

It is obvious to the reader that the wound created by her dismissal from “30 Rock” (first as the lead female and then, later, as a reoccurring member of the “Rock” family who would play different quirky roles in each appearance) still runs red, especially when Ms Dratch writes:

“When I was replaced on the show, I felt confident that Tina had ‘fought’ for me as much as she saw fit, but that at the same time, the network has certain demands, and the fact exists that I wasn’t right for the part as it turned out to be.”

Which seems to roughly translate into something a good deal less even tempered, especially with the telling placement of the quotation marks around that word “fought.”

And, indeed, as even Ms. Dratch herself points out on Page 61:

And then she talks about it some more, with a whole chapter of insecurities writ large (literally, as this is one of those memoirs in which the print is rather large to plump up the pages), before the book, like Rachel Dratch herself, embraces change.

As her career was stalled, she decided instead to concentrate on other aspects of her life. And in doing so, she not only enters into some rather poorly thought out relationships, but also attends the Burning Man Festival, adopts a dog and, in what one might mistakenly consider an Aha! moment, opens her arms wide to the Universe:

“Clearly, love was not happening. My career still wasn’t happening either . . . I was going to be wiser now. I wasn’t going to waste my precious time bumming out, because you never know when your break is coming. However, it was getting harder and harder to stay optimistic. So, next, I turned to spirituality. Well, I turned to . . . The Secret.”

For those who missed it, The Secret is a book and DVD combination, popularized by Oprah to help the muddled masses learn to manifest their desires in the form of oodles of free swag, sudden fame and, more often than not, passionate relationships with men who looked like they leapt off the covers of romance novels.

But in the end, The Secret turns out to be as helpful as Burning Man or the dog (whom she returned to its previous owner).

Finally there is this—the payoff to the joke that the book’s title sets up:

“Sure, I’d still have mornings where I’d wake up thinking, ‘Wow. I may be alone forever and never have a family. I may miss out on a really big LIFE THING,’ which would create a rising panic in me. But for the most part, I realized that as we grow older, we adjust and roll with what we have in the present, though it may not be the future we had dreamed up for ourselves in the past. I was forty-three years old and I was actually seeing benefits of not having kids and was accepting my fate after all those years of struggling.

What follows, beginning on Page 140 of Girl Walks into a Bar is about the sweetest piece of writing on the subject ever captured on the pages of a book about the unexpected joy that life can bring and the unexpected anxiety that accompanies it (especially for those of the glass-half-empty ilk).

While some might insist (the author among them) that the first (and longer) section of the book is needed to set the situation in motion (the set up of the joke for the punchline that follows), the reader counters with the idea that this section, involving a romance of sorts and a surprise pregnancy, deserves to have received the lion’s share of the print.

While it is certain that the publishing industry would likely rather see a memoir of life on “Saturday Night Live” and beyond as the hook, the simple reality is that the story of Ms. Dratch’s midlife romance and unexpected motherhood is the part of the project that sings.

And in telling her the story of the birth of her child and of the new emotional bonds it created—a story common, if not to all, to many—Rachel Dratch writes with a moving yet still humorous elegance that belies the antic machinations in the early chapters in which, in telling tales of “SNL,” she writes as if she has told these stories before, many times, even dined out on them. But in writing about the things that matter most, she writes as if she is whispering secrets in her reader’s ear.

As here, where she shares an email she received from her boyfriend’s brother:

“. . . Rachel, I am sure your friends have told you to get ready, that there is nothing like the unconditional love a mother has for her child. They’re right. That bond is instant. But what you and John will discover is, the truly amazing part is not the love you will give but the vast amount that flows from a child to his parents. There is no way to prepare for it. It will happen within the first day or so. The baby will cry and you’ll wonder if he’s hungry or needs a diaper change, and then you’ll pick him up and he’ll instantly stop. Everything was okay, he just wanted to be held. In that moment nothing else, including the old ways we use to define ourselves, any longer matters: What you weigh, where’s your hairline (that one’s more of a guy issue), how much is in the bank account, where you went to college or what you achieved in your career is all irrelevant to this little child. All that matters to him is that you’re his parent, that you’re his mommy and daddy, and that is more than enough for him.

“So welcome to the family! You’ve given us reason to celebrate two additions.

“I read the letter on an Amtrak train, and I don’t think of myself as an Ol’ Softy, but I had tears streaming down my face when I finished it. It could have been hormones, I guess. I called up John and said, ‘Oh, my God. I’m crying from this letter!’ He revealed that it had made him cry as well. Then I sent it to my mom and a friend from home, not mentioning my tears, just saying how nice it was. They both called me back crying. Uncle Doug had created a trail of tears up the Eastern Seaboard.”

Girl Walks into a Bar should be considered something of a life lesson for the publishing industry. What was likely the original selling point—the “30 Rock”/“SNL”/What’s-Lorne-Michaels-really-like sections of the book—are, in fact, nothing special. The part of the book that is most interesting is also that which deals with material that is most mundane.

The image of Ms. Dratch, child in her arms, learning the lessons about what is important in life much as we all learn them—that’s the part of the story (the punchline, after all) that deserves all the applause.