The Girl on the Velvet Swing: Sex, Murder, and Madness at the Dawn of the Twentieth Century 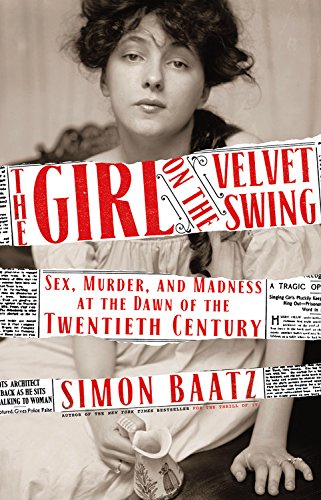 No book could have a more auspicious moment of publication than Simon Baatz’s The Girl on the Velvet Swing. It’s a detailed account of one of the greatest sex-crime scandals of the early 20th century Gilded Age—the triangle between the ingénue chorus girl Evelyn Nesbit, the architect Stanford White, and the erstwhile playboy Harry Kendall Thaw. It’s being released a century later and little seems to have changed. Revelations of sex-harassment scandals involving powerful— economically, socially and/or politically—men, straight and gay, are the lead headlines of the media’s ceaseless 24 hour bark-fest.

Unfortunately, for all the serious primary source research the author did, his book will likely not capture the popular imagination as have other recent works of literary nonfiction genre set in the fin de siècle era. Two of the most popular studies—Erik Larsen’s The Devil in the White City and Karen Abbot’s Sins of the Second City—effectively use the specific episode they investigate, i.e. murders of women and prostitution, respectively, to illuminate the changes reshaping American society in the face of modernization and urbanization. Baatz’s work never gets beyond its narrow, if interesting, subject matter.

With regard to sex scandals, little changed during the half century between the Civil War and World War I. Sex-related scandals, often involving leading citizens, were the subject of early tabloid exposés and gleefully enjoyed by the citizenry. Politicians, business tycoons and the offspring of the rich and famous were among the most notorious philanderers and the subjects of much public curiosity. And none more so than the Nesbit-White-Thaw triangle.

On June 25, 1906, at Madison Square Garden’s Roof Garden, Thaw shot and killed White because he had raped his wife, Nesbit. It was a scandal rooted in jealousy, both real and imagined, that became the subject of endless nationwide notoriety. Imagine if the husband of one of the women Harvey Weinstein—or, for that matter, Donald Trump—allegedly sexually abused took out his vengeance in a similar way?

The Girl on the Velvet Swing lumbers through enormously rich historical resources to document the Thaw-Nesbit-White incident. It carefully chronicles every step of the story.

It follows Nesbit from her early role in the chorus line the successful Broadway show, Florodora, and her career as a model for artists, illustrators and photographers. It discusses her introduction to White, a notorious womanizer, at his luxurious Manhattan apartment by a fellow performer (she was essentially pimped) and where he had a velvet swing attached to the ceiling of one of the rooms. It carefully describes how at one of their get-togethers, White offered Nesbit drugged champagne and then raped her. At the time, White was 47 years old and Nesbit just 16.

The book’s first phase follows White and Nesbit’s companionship and introduces Thaw, a Pittsburgh playboy, and his affair with Nesbit, culminating in their marriage—and her admission of being raped by White—and ends with Thaw’s shooting of White.

The second section details Thaw’s subsequent two trails for murder and his sanity drawing exhaustively from court transcripts. He was ultimately found not guilty but criminally insane and sentenced to an asylum, the Matteawan State Hospital. (Most peculiar, the author never discusses what happened in the eight months between the two trials.)

The third part follows Thaw’s escape from Matteawan, an action financed by his family and executed by Westie gangsters, though a series of subsequent trials in Canada and the U.S., including the Supreme Court. In the end, a New York court found Thaw not insane, thus freeing him from imprisonment. The book concludes tracing the lives of both Thaw and Nesbit after the media spotlight faded.

One of most peculiar aspect of Baatz’s study is his apparent uninformed assessment of Thaw’s numerous reported incidents involving whipping young girls and a young man. He seems to agree with the apparent perception of Thaw was a “vicious degenerate” rather than seeing his actions as an aspect of his likely psychopathology. Thaw seems to have suffered what psychiatrists today call an ephebophilia, a sexual fetishism.

Passing reference is made to an apartment Thaw kept on West 46th Street where he reportedly whipped girls. Not mentioned are reports that Thaw had earlier operated an expensive hideaway in Pittsburgh, under the pseudonym of Professor Reid, and engaged in his sexual perversion, paying willing girls and young women to perform.

Over the last century, the Nesbit-White-Thaw triangle has been the subject of numerous media undertakings. It feeds many fictional and nonfiction works as well as two movies, one released in 1907, The Unwritten Law: A Thrilling Drama Based on the Thaw-White Case, the other, The Girl on the Red Velvet Swing, released in 1955 and starring Joan Collins. One can well expect Baatz’s most recent contribution to fuel a new film or TV series.