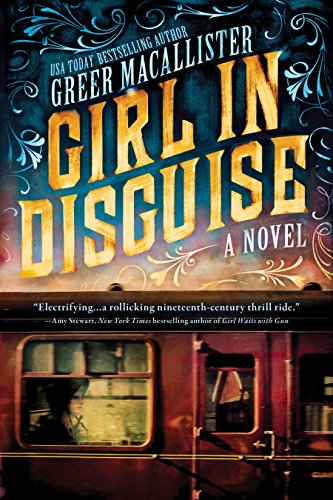 “The author has done a masterful job writing Kate Warne’s story in this eye-opening novel.”

One is immediately drawn to Girl in Disguise because of its unique premise: a story about the first female detective in the legendary Pinkerton Detective Agency. This interesting historical fiction takes place in 19th century Chicago, a time when such a position for a woman was unheard of. It’s a tale featuring Kate Warne who actually became one of the best operatives, male or female, in Allan Pinkerton’s agency. Using the vernacular of the day, the author transports the reader back in time to a rough and tumble city about to experience massive growth in population and construction.

Widowed at just 23 years of age due to her gambler husband’s murder, she was desperate for work. She learned how to manipulate and fool people thanks to her his gambling obsession, so armed only with those questionable skills she answered an ad in the local newspaper placed by the Pinkerton Detective Agency.

Upon her arrival for an interview, Allan Pinkerton was surprised to learn the woman was not applying for a clerical position, but rather for a detective’s job. “Mrs. Warne,” he said, . . . “Women are . . . not encouraged to apply.” After a lengthy back and forth, she refused to be denied a position simply because of her gender. Pinkerton finally relented. He gave her a chance to work a case involving a very expensive ring. If she succeeded in locating and recovering the piece of jewelry, Pinkerton would hire her.

Kate did succeed, although her colleagues demeaned and scoffed at her, one even tried to ruin her accomplishment. However, once she was hired and proved how valuable she was, Pinkerton assigned her to many of the agency’s most complex and dangerous cases.

During her tenure, the country became embroiled in the Civil War. The Pinkerton agency was deeply involved in the Union effort and operated undercover in many capacities. Kate teamed up with a fellow detective and together they posed as man and wife venturing into Confederate territory in an attempt to gather intelligence about the Confederate strategy. Their efforts bore fruit and ferreted out several spies who were later arrested. Warne was also involved in a plan to guarantee safe passage for President Lincoln after the agency was made aware of an assassination plot while the president travelled by train.

The author has done a masterful job writing Kate Warne’s story in this eye-opening novel. Her accomplishment in becoming the first female detective for Pinkerton is likely unknown to many. Yet this milestone was a significant moment in women’s history since they were not even allowed to be members of a police force, much less detectives, until 1891.

Much of Kate Warne’s life is a mystery. Many of Pinkerton’s files relating to the woman were destroyed in the Great Chicago Fire. Although the story doesn’t include Warne’s eventual death, it is known that she died from a case of pneumonia shortly after the Civil War on January 28, 1868. Allan Pinkerton was at her bedside when she passed. He buried her in the Pinkerton Family Plot at Graceland Cemetery in Chicago. Curiously, her headstone bears the misspelled name, WARN.