The Girl with a Clock for a Heart: A Novel 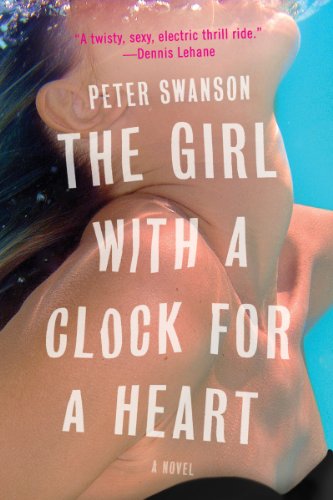 When you’ve been beaten up three times in your life and each time the cause of all that blood, bruising, and busted bones is the woman you’re madly in love with, perhaps it’s time to find a new love interest. At the very least learn self-defense or become a faster runner than your antagonists.

But not George Foss and not when that woman is the temperature rising Liana Decter, a dangerous femme fatale with self-serving tendencies bordering on sociopathic.

George first met Liana—or Audrey Beck, as she called herself—when he was a freshman at college, 20 years past, and was immediately hypnotized by her. A passionate relationship ensued for most of the semester—until one day he is informed of the devastating news that she has committed suicide.

Or has she just vanished without trace?

Years go by, but George’s detrimental obsession with Liana has never faltered. He sees her everywhere he goes: on every street, in every store, a corporeal figure tormenting his heart and soul.

Then rumors begin to surface. She never committed suicide. She’s alive and well. Somewhere on the east coast? Perhaps the west coast? George doesn’t care where she is, only that she is alive and that one day they will be reunited and recommence their relationship—despite the fact he’s already been in a relationship for a number of years with a girlfriend.

The joy of Liana’s miraculous resurrection, however, is quickly tempered by other rumors, not so-happy ones at that: She is now Jane Byrne, a fugitive from the law—and not just for overdue parking tickets. No, the dreaded double-M: money and murder.

Then one day in Boston in his favorite watering hole, Jack Crow’s, he sees her. Only this time he really sees her. Not a tormenting spirit, but a truly tangible being as real as the booze he’s sipping. When he finally plucks up the courage to confront her, he is shocked to discover that the malicious rumors are . . . all true.

While most sensible people would run a mile away from this woman with such a deadly curriculum vitae, a woman who uses aliases the way an ordinary person uses facial tissues, George keeps wanting to run toward her, his almost heroinlike addiction needing its fix.

After a short conversation, Liana tells George she will explain everything to him if only he’ll meet her tomorrow, in the bar. Hesitant, but still obsessed with her, he agrees.

But the next day as he waits in the bar, he receives a phone call from Liana saying she can’t make it, but could he drive to her present abode in New Essex, 45 minutes north of Boston?

Given directions, George drives to the address that very afternoon, his heart beating with expectation and his testosterone level rising rapidly. While rapping on the door, George sees a man at the side of the house who informs George she’s no longer there.

“The man was pretty small, but something the way he carried himself made George almost physically recoil. He reminded George of a pit bull, the kind you’d normally see nuzzled and straining on a lease.”

After some verbal jousting and bluff, with George pretending to be simply a salesman, Pitt Bull and George shake hands in a final goodbye. The handshake almost crushes the knuckles in George’s hands, but the pain is not as terrible as the killing kidney punch administered after, leaving George gasping for breath, head spinning with blackness.

“‘Donnie Jenks. J-E-N-K-S,’ the short man said. ‘Tell Jane she has one goddamned life left, and it’s a short one. You try and help her in any way and I’ll shorten your life as well. Remember all that?’”

George does remember it. Very clearly. Repeating it verbatim to the woman of many names as soon as he sees her lurking outside his back stairs a few hours later. She in turn explains that was the reason she had to leave, that Jenks intends to kill her. She has stolen a very large bundle of cash—half a million dollars, to be precise—from her boss in Atlanta, Gerard MacLean, a dodgy and ruthless businessman who uses his furniture business to front numerous illegal dealings.

To add to her woes, MacLean has sent sadistic heavy Donnie Jenks, a man born to inflict memorable pain upon his victims. Jenks not only intends to retrieve the stolen cash, but to kill Liana into the bloody bargain.

Does George run up those back stairs, lock all doors, and call the police? Or does he believe her when she says only he, George, can help save her? The dream girl of George’s past has now become the nightmare woman of his present . . .

The Girl with a Clock for a Heart is roller coaster thrill-fest of a ride, filled with deliciously wicked moments of mystery, murder, and mayhem, double-cross and deception. A cerebral noir thriller debut.