The Gift of Adversity: The Unexpected Benefits of Life's Difficulties, Setbacks, and Imperfections 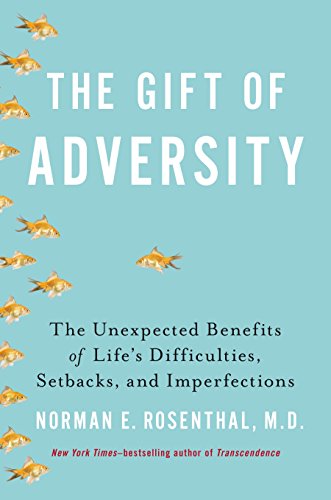 “This book could make a tasty chicken sandwich were it not served up as a hamburger.”

When a reader picks up a book by a noted psychiatrist about adversity, it is generally expected to provide a how-to roadmap for dealing with life’s obstacles.

What one gets in The Gift of Adversity: The Unexpected Benefits of Life’s Difficulties, Setbacks, and Imperfections is an autobiographical account of the author’s life. This is not to say that it is a bad book. In fact the rendition of his life growing up in South African apartheid and his eventual ascendancy to becoming a significant researcher on the world stage is both interesting and enticing. The problem however, is in its attempt to be a manual for managing adversity.

The author describes vignettes in chronological order about his background growing up as a Jew during South African apartheid, his education, his choice of psychiatry, and his contributions to mental health such as his work on Seasonal Affective Disorder and the benefit of Transcendental Meditation. The vignettes are well written, short, and easily read, as is the entire book.

Were these vignettes the sole text of the book, they would make interesting reading.

Each vignette ends with a two- to three-sentence summary of what the author hopes the reader will learn from the author’s life. While true and accurate, these summaries are tired nostrums which are presented without shedding any new light on time-honored advice. They essentially say to the reader “Know this truth,” but say little as to how and when to obtain this wisdom. Such end-of-chapter statements include:

• Most things don’t have to be perfect. So cut corners if you must as long as you don’t sacrifice the essence or core of the work.

• Whatever you choose to do in life, do it as well as you can.

• Life is precious but precarious. Treat it with care and respect it deserves.

• Most people have prejudices against certain groups or ideas. It may be worth questioning your own prejudices.

• Each significant choice we make involves both a commitment and a loss so choose your path carefully at every major fork in the road.

• If you wish to find the best answers, ask the right questions. Then find the right employer and colleagues.

Professionally, psychiatrists do not tell lengthy stories about themselves in the course of their work. While an occasional personal revelation may be helpful to a patient, mental health work involves listening to, and understanding the patient’s story, not relating one’s own.

Interestingly, there are relatively few autobiographies written by psychiatrists, or when written, they describe only a particular aspect of their lives. The Making of a Psychiatrist by David Viscott or Kay Redfield Jamison’s accounts of her struggles with Bipolar Disorder come to mind.

Dr. Rosenthal has overcome serious and small adversities alike. One does not easily survive a life-threatening knife attack by a Panga gang in a Johannesburg Lovers Lane. Having guests show up late for your childhood birthday party, failing to be a gifted athlete, or having your own child fail to follow the Golden Rule are not earth shattering, but are of some interest. A book dedicated to stories about the author's mastery of his life’s adversities in becoming a respected researcher and media personality makes good reading.

Punctuating the narrative with worn-out sayings however, does little to assist the reader and only succeeds in diversion from the story.

The cover of the book with one small goldfish swimming in the opposite direction from a number of other small goldfish is intriguing, and with closer inspection represents the issues raised inside the cover. It is pleasant and serves for a book that might be picked up at an airport bookstore for travel reading. Its tone is consistent with a story that is for the most part written in a gentle style, but with little punch.

Overall this book could be revised from something that leaves the reader wanting into a good read by taking out the tired, end-of-chapter portions and avoiding the cover/prologue suggestions that this book will tell the reader how to manage adversity. The Gift of Adversity could easily be subtitled A Psychiatrist’s Personal Journey or From Apartheid to Seasonal Affective Disorder. These subtitles or something similar would be more true to the book’s content and still be a draw to the reader.

When one goes to a fast food restaurant and orders a hamburger but receives a chicken sandwich, it would be appropriate to ask in the words of an old television ad “Where’s the beef?” This book could make a tasty chicken sandwich were it not served up as a hamburger. Dr. Rosenthal’s story is an interesting one, but attempting to make it a self-help book on adversity serves to make it weaker.