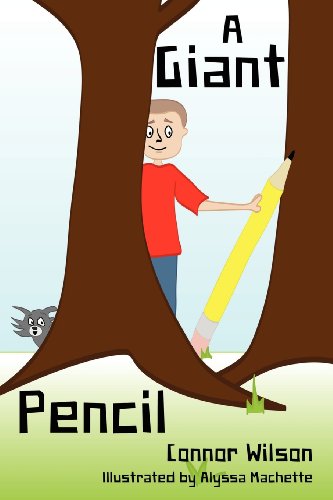 “The world may get you down sometimes but overall it’s a pretty good place to be.”

We all make mistakes. And we’ve all wished for a way to erase them. So a story about a boy who finds a giant magic pencil with an eraser that can make things disappear is especially appealing to young children who often feel out of control and lost in the daily rough and tumble of family and school life.

Although fictitious, one suspects that much of it is based on real life because the author is a nine-year-old boy, Connor Wilson, who has the distinction of being the country’s youngest traditionally published fiction writer.

A Giant Pencil may be fiction but young Billy’s feelings are real: feeling fussed at by his mom and teachers, picked on by his siblings, and bullied at school. No wonder he feels grumpy most of the time—until he sees a giant pencil fall from the sky.

No one else can see it. When he discovers he can erase anything he doesn’t like, he figures his troubles are over. Billy doesn’t hesitate to use his eraser to get rid of everything unpleasant around him. Then he finds himself all by himself, lonely and scared.

What’s a boy with a magic pencil to do?

Parents can teach very young children a lesson about the importance of family and fitting in with others by reading this book to them.

But if you have an eight- or nine-year-old child like Billy, surreptitiously leave the book out on a table or desk. Let your child slip away to a quiet place to join Billy as he wreaks his revenge on the world. See if they don’t come back with an important discovery: The world may get you down sometimes but overall it’s a pretty good place to be.