The Ghost Script: A Graphic Novel 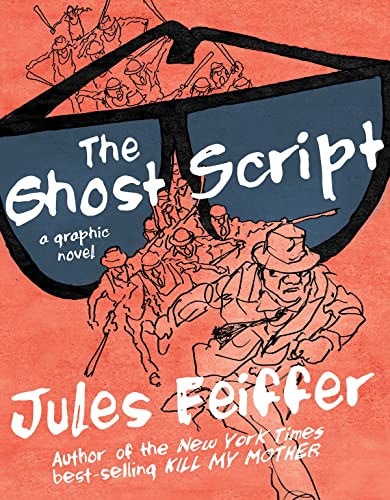 Jules Feiffer is a masterful storyteller, creating unforgettable characters like his dancers, his neurotics, his therapists. Here in The Ghost Script, the third in The Kill My Mother trilogy, the characters include Archie Goldman, an indecisive private detective, and a Hollywood cast of blacklisted actors, screenwriters, and producers. The “Ghost Script” itself is a rumored screenplay laying out the powers behind the blacklist in the early 1950s, hunting for and kicking out of the profession, anyone associated with communist causes.

The story is convoluted, moving back and forth in time, introducing us to the various elements in the shifting story of accusations and counter-accusations, plots and counterplots. Feiffer controls it all with a loose line, expressive dialogue, and pages bursting with energy.

Moving from vignette to vignette, the paranoia of the period is vividly portrayed. Who people are is often not what they seem to be. One page that shows this well features a teenage boy, railing against the “reds” and “pinkos” in his school: “Lousy, stinking Reds! Everyplace you look, America is drowning in Reds! . . . Mrs. Zandel refused to sign a Loyalty Oath. That's how they caught her. Reds think they're smart, but they're stupid! Me, if I was a Red, the first thing I'd sign is a loyalty oath. I'd sign a hundred of 'em! See? It proves no matter how much you read, you can be stupid.” This young man ends his rant against communists by talking about turning in his own mother as suspect, a “pinko” for the kind of movies she makes. But really, he would never do that. Or would he?

The characters and plot lines can be hard to follow but the effort is rewarded and made easier by the graphic format. Does the noir genre work in a black-and-white comic? Yes, when it's in the expert hands of someone like Feiffer, a master of creating worlds within worlds, all with a sharp, satiric twist and quote-worthy dialogue.

The only caveat could be the ending, not at all expected and literally coming out of nowhere. Do we ever get to read even a page from the “Ghost Script”? Do we learn who the real powers are behind the blacklist? No spoilers here, but the last page turns the story from a detective cat-and-mouse game into science fiction. For this reader, the next-to-last page would have been a more fitting end to all the twists and turns. Sometimes the story, like the detective can just run out of gas, with nowhere else to go.