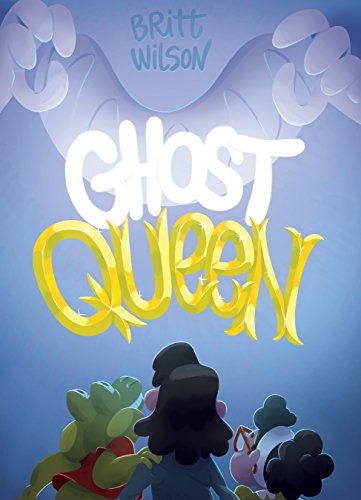 This should be a fun graphic novel. Wilson’s richly colored illustrations are lively; the multicultural family characters timely; the storyline inventive. Somehow, though, it doesn’t deliver. It begins with a leak in the ceiling, a dad who has to head out of town and wants to fix the roof in a conventional way by calling a repair service, and a mom with magical powers who needs to host an emergency (aren’t they all?) yoga retreat in the backyard studio but is perfectly happy to practice a repair spell she just came across. Dad kisses Mom goodbye and pleads, “Be careful with that spell, ok? We still have a goblin infestation from your last home improvement project.” Readers know they’re in for some quirky trouble.

And trouble there is. The kids head off for school, and Mom casts her spell. When the kids return home, they think they’ll pass the evening with a forbidden scary movie and pizza. Unfortunately, the ghosts arrive. That leaves the kids to figure out how to plug up the hole in the air that leads to Ghostropolis. Thank goodness daughter Luey discovers a spell to send the ghosts back through the hole.

It sounds entertaining, doesn’t it? If you’re a lover of graphic novels, it may be. If you’re looking for a story to follow, though, readers would benefit from more text. Almost half the pages have fewer than a handful of words; the pages with text have only a handful or two more. It’s one thing to draw reluctant readers in with few words. It’s another thing to have no words. Even with the spirited illustrations, the lack of text makes the story difficult to follow. The question is whether the minimalist text encourages more reading or results in readers ignoring what little text there is.

The good news is that for young readers, the ghosts are more destructive than scary, and the storyline bubbles with humor. At one point, Wilson does amp up the tension a bit in a ghoulish challenge from the Ghost Queen. “Where is that witch who defeated me?” the Ghost Queen asks. This may be a reference to the mom with the magical powers, but it’s not clear.

The ghost continues, “I’d like to take this opportunity to rip her limb from limb, tear out her toenails, braid her eyelashes, break every bone in her body . . .” Even that illustration is a friendly one, with the ghost ticking off her fingers the items on her list, so it won’t keep young readers up at night and may even get a laugh. But it also means there’s not a lot of tension for older readers.

The storyline is reminiscent of the ancient Bewitched television show, with an ordinary dad, a mom with magical powers, and at least one child who follows in the mom’s footsteps. The concept is filled with potential—humorous or scary. But Wilson appears to be an illustrator first and a storyteller second. That order works for picture books, but shortchanges older readers.

No doubt there will be more coming from Wilson, and there should be. She’s mastered the graphic part of graphic novel. Now, if there could just be a bit more novel part to it, it would be a real win.

Janelle Diller’s most recent novel for adults is Never Enough Lilacs. In addition, she writes the Australia, Austria, and Mexico books for Pack-n-Go Girls Adventures.