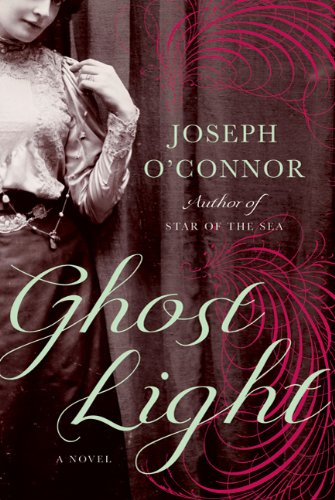 “There are eras of every life that have a carapace about them, a scar grown out of the woundedness . . . we sensed, even then, that this framed time must end and that all would be changed from this out.”

So it is for Molly Allgood—stage name Maire O’Neill—the muse and fiancée of the famous playwright, John Synge. She’s the worthy subject of this haunting and masterly crafted novel that re-imagines the heartbreaking love story between these two artists of the early 20th century Irish theater.

Molly, as we first see her, is an actress aged beyond her years, scraping a living in a cold tenement in postwar, bomb-shelled London, trying to muster her strength for a late-afternoon radio broadcast for the BBC. Her life has been a full one: Theatrical success in Dublin and America, two husbands, a son grown and died in the war, and a good daughter married with twins in Aberdeen.

Yet for the fictional version of this sharp-tongued, gin-hungry titan of a lost word, her theater truly went dark when Synge died in 1909.

Joseph O’Connor unfurls this story as a day-in-the-life of this broken woman determined to hold on to her dignity in the midst of trying times. Through her memories he brings to life Yeats and Lady Gregory, and most fully, a frail, morally conflicted, socially blind but powerfully talented Synge. In O’Connor’s acknowledgements, he notes that certain biographers will want to beat him “with a turf shovel” for the liberties he has taken with the facts. But this is fiction, and O’Connor has plumbed those liberties to pen a story of deep emotional truth.

A good part of this novel’s appeal is in the language. Through Molly’s voice comes the kind of Irish idiom that would have made Synge proud. It’s a book to savor. It casts a spell as sure as some old Irish storyteller sitting in the corner of a Mayo pub, narrating the tale around the stem of a clay pipe, jumping back and forth through the decades, dropping little revelations to tease you along, and then ending paragraphs with twists of wisdom that rise right up in your face.

This loopy chronicle of events serves the subject well, as does the mix of forms. Letters sprinkle the text. O’Connor narrates in both second person and third person point of view. One whole scene is written as a play, with Molly, raised Catholic over a junk shop, bringing her aristocratic, over-educated, Anglo-Irish Protestant boyfriend to meet her fractious family where dinner is a pig’s-head and conversation veers with comic brilliance toward the political.

Only at the end, when the whole of the story is told, does the patchwork become achingly clear. The epilogue contains a long love letter written by a very young Molly. It reveals the half-wild, irrepressible spirit that Synge could not help but love . . . and make immortal, as the first actress to depict her counterpart Pegeen Mike in The Playboy of the Western World.

The “ghost light” of the title refers to a lantern kept on in a theater after the theater goes dark, so that the ghosts can do their plays. It’s Molly, here, who is playing lamentations in the dark. Her performance will break hearts. For putting the words in her irreverent little mouth, Joseph O’Connor deserves a deluge of literary accolades.