The Ghost Bride: A Novel 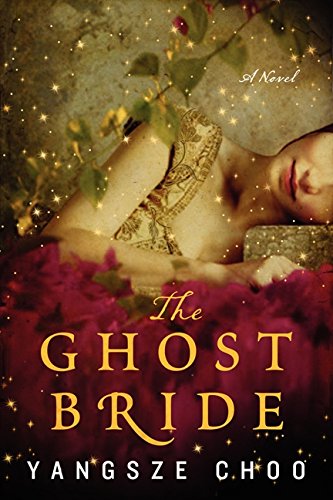 “Li Lan’s odyssey keeps her on the brink of earthly demise and keeps the reader riveted to the page . . .”

Yangsze Choo considered writing her thesis at Harvard about spirit marriages, but chose economics instead. That was lucky for us.

In The Ghost Bride Ms. Choo offers the literary world an intriguing tale involving the “spirit marriage” custom among Chinese immigrants in Malaya. Within this community, there is a strong folk tradition dealing with marriages to the deceased in order to placate their restless spirits.

According to Ms. Choo, Western attitudes about spirits are influenced by science; Asian minds do not question the existence of these spirits, but dedicate energies to their “management” such as feeding, mediating disputes, providing for comfort, etc.

Readers who seek to learn about cultural tradition or who have tired of either vampire or zombie genre will enjoy this unique view of the afterlife. Woven in are elements of intrigue, twists of fate, and the power of love between beings—regardless of realm.

The setting is Malaya, in 1893, a colony of states, including Singapore, which the British controlled from 1771-1948. Chinese immigrants formed overseas communities there and became part of the business upper class. Despite a very western kind of material success, they maintained strong ties to ancestral clans, to which they remained loyal for many generations.

As the story begins, we meet a businessman who has fallen into debt and secluded himself in his own opium-infused world. Prospects for his daughter, Li Lan, to marry into wealth are dim at best until he receives overtures from the Lim family.

There is only one catch. The prospective groom is dead and they wish Li Lan, to marry his spirit as a “ghost bride.” Such an arrangement would allow her to live with the groom’s family, enjoying a comfortable life while returning her own family to its former status. This represents a “way out” of inevitable poverty, but the man is troubled by having to seal his daughter’s fate in such a manner.

Li Lan is horrified and tempted. However, complications set in when she meets (and is enamored by) another member of the Lim family. She is then troubled by dreams from the intended (deceased) son.

Confused and frightened, she consults a medium, and in the process encounters another interesting character, Er Lang, who turns out to be a “shuttle diplomat” who traverses the earthly and spirit worlds.

While in consultation about her dilemma, Li Lan makes errors in judgment that “plunge her into the shadowy parallel world of the Chinese afterlife:”

“Was I a spirit now? Frantically, I circled my body. My body, I reminded myself. It was said that when the soul was parted from the body that it could be enticed back.”

What follows is a long series of travels and adventures as she attempts to return to her former self. Was she dead or alive? She teeters on the brink of both worlds. Her spirit self passes through doors and walls and into the home of her betrothed, where she uncovers secrets of the Lim family. Later, she learns truths about her own family history. Both discoveries contribute further to her dilemma.

She braces for the next phase in her search for further truths: Life on the Plaines of the Dead. This is a ghostly “Purgatory” where residents await their eternal fate. The burnt offerings from the living determine the status of the inhabitants. Amidst the desolation, many live the good life, with ample help from those less fortunate who were sent into the afterworld with no support from the living. They become the servants and live out their waiting time in total servitude.

Li Lan’s old friend Er Lang dips in and out of various situations with a reassuring-- almost humorous—predictability. He is an affable spirit, whose help is both welcome and necessary. Occasionally, a contemporary vernacular creeps into the dialogue. It is noticeable because of the ethereal feel of the rest of the story.

Can she “go home again”? Neither the answer nor the implementation is a simple matter. The author provides a clever twist of fate as she takes up the threads of the story and deftly leads us to the final chapter.

Ms. Choo gives us insight into old Chinese beliefs of the afterlife and its worlds. The plot is intriguing, as are the lessons subtly interwoven about aspirations, material success, loyalty, perception versus reality, and trusting one’s own instincts.

Li Lan’s odyssey keeps her on the brink of earthly demise and keeps the reader riveted to the page—even though it’s “only a ghost story”!