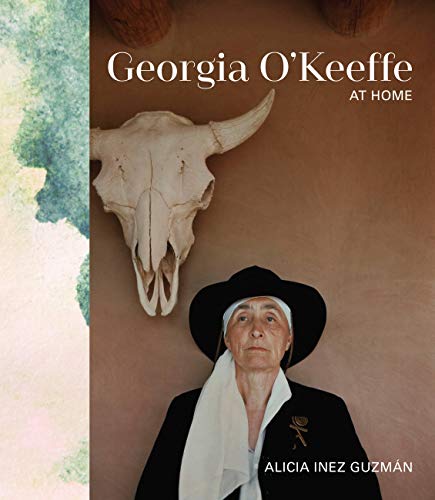 “an insightful and ambitious book that is lavishly illustrated . . .”

Georgia O’Keeffe at Home by Alicia Inez Guzmán is not a version of O’Keeffe’s living spaces as in Better Homes and Gardens. It is an in-depth examination of the artist’s life’s work within the context of the various locations where she lived, studied, painted, and where she felt she had finally “arrived.”

The book is amply illustrated with much of her artwork and provides compelling insight into how O’Keeffe progressed through her evolution from art student, to teaching assistant, to teacher, mature artist, and independent woman, and from naturalism to stylization, minimalism, and abstraction.

The early impact of O’Keeffe reading Kandinsky’s The Spiritual in Art, visiting Alfred Stieglitz’s 291 gallery six months after the provocative Armory Show of 1913, and maintaining a correspondence with Stieglitz after he had seen her work, cannot be overemphasized in terms of the effect it had on her at a time when she was attempting to find her own visual language.

Feeling incapable of putting her feelings into words, O’Keeffe began finding her visual language in works on paper with a charcoal series that she titled, Specials, beginning in 1912. Powerful in and of themselves in black and white, they presaged her abstract color compositions in paintings.

Interestingly, although she found a true soul mate in Stieglitz—who shared her passion for the unvarnished avant garde and had little respect for conventional practices, and whose pen-pal relationship began as a friendship sharing strong conceptual ideas on the nature of artistic expression—she developed such a strong sense of self that it eventually propelled her as a groundbreaking independent female artist.

O’Keeffe, a native of Sun Prairie, Wisconsin, lived in many locations including Amarillo, Texas, where she taught; New York City, where she painted and exhibited; Charlottesville, Virginia, where she studied, as well as her final home near Taos, New Mexico. During the years when she was married to Alfred Stieglitz she shuttled back  and forth between New York City and New Mexico.

Having been exposed to such diverse locations as Taos and New York City allowed O’Keeffe to effectively narrow the zone of her inspiration. Upon returning to the wide open spaces she expressed, “The wonderful skyline was a tremendous line—just earth and sky meeting—nothing to sight,” and it issued a resounding “yes” in her soul. She loved the “wonderful emptiness,” which in her paintings would be transformed into brilliant stretches of color.

This book explores in detail how O'Keeffe developed as a woman and as an artist to arrive at her own conclusions regarding her art, relationships, and life. It also draws a clear line between what O’Keefe experienced in her life and how it was represented in her art, such as the painting, Black Abstraction (1927), that reflects her profound feelings after a surgery that removed a tumor in her breast; or her depiction of The Shelton with Sunspots, N.Y. (1926), after gazing into the blinding glare of sunlight reflected off a skyscraper.

The book’s color reproduction of her paintings on medium weight semi-matte paper is excellent. Georgia O’Keeffe at Home by Alicia Inez Guzmán is an insightful and ambitious book that is lavishly illustrated with informal snapshots and many pieces reproduced in color that trace O’Keeffe’s stages of life with friends and Stieglitz, from youth to old age, as well as her paintings and life’s work.