The Generals Have No Clothes: The Untold Story of Our Endless Wars 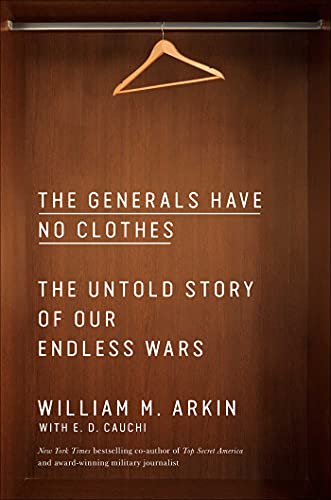 Our country has been at war for 20 years, and despite several presidents promising to get us out of conflicts in the Middle East, each one has been defeated in his ambitions to date. In The Generals Have No Clothes, William H. Arkin and E. D. Cauchi sharpen their pens to make the case that the public must seriously challenge the national security state if we ever want to see these endless wars end.

The book is an expansion of a letter Arkin wrote when quitting his job as an NBC News analyst. A former Army intelligence officer and longtime national security reporter, Arkin became increasingly agitated by how the media’s perpetual focus on President Trump meant that the rest of the federal government was largely getting a free pass. Even more worrisome, he argues, was the emerging fairytale that the national security establishment, “these makers of perpetual war and the secret agencies of government that they represented—the so-called ‘deep state’—were going to save America from the new president’s recklessness.” Relying on those officials, Arkin argues, is to fundamentally misunderstand what their actions have done for the United States and the world for a generation.

“We’ve had more than a generation of national security leaders who sadly and fraudulently [have] done little of consequence,” Arkin wrote at the time. “I’d argue that under Trump, the national security establishment not only hasn’t missed a beat but indeed has gained dangerous strength. Now it is ever more autonomous and practically impervious to criticism.”

The aim of the book is to reawaken the public to pay attention to what our decades of war have wrought; most noticeably, there is little evidence we have become any safer. He makes a compelling case for the many problems with our current path: unsustainable Pentagon budget, forever wars, and our failure to prevent the loss of over 500,000 lives to COVID-19.

He particularly highlights how making counterterrorism a military mission, rather than a law enforcement issue, makes endless war inevitable. Since the mission requires secrecy, it also shields those actions from public scrutiny. And rather than eliminating terrorist groups, new ones keep emerging. “Killing terrorists in battle merely condemns us to our own endless assembly line of doing that forever,” he concludes.

To solve these problems, Arkin recommends creating a new global security index that includes other areas of public safety. A new index, Arkin argues, would include not just military activity but also the economy, demographics, health, and the environment to estimate if our security is improving or declining. It remains an open question whether broadening the definition of national security would backfire. As we saw with election security and other civilian issues, that framework often centers on the precise validators that Arkin sees as unworthy of continuing to receive the public’s trust.

The other problem he identifies is an insufficient cadre of independent civilian national security experts. To counter that, he recommends a reinvestment in civil society organizations who will challenge the national security status quo. As someone who works at such an organization, I certainly welcome the recommendation, but I worry it is insufficient to counter the influence of money and defense contractors permeating the federal government. Spreading defense contracts across congressional districts, and the perpetual revolving door between senior national security officials and companies who profit from endless war, make it even more difficult for independent experts to obtain a seat at the table and have their voices heard.

As many in Washington seem eager to push us into a new Cold War with China, it’s important to examine the failures of the past 20 years. This book may not provide all of the solutions we need, but it’s a useful primer on why we all can no longer afford to keep looking away from our endless wars.

Mandy Smithberger is Director of the Center for Defense Information at the Project On Government Oversight (POGO). She is an expert on national security, Pentagon reform and the Defense industry, and was a national security policy adviser to U.S. Rep. Jackie Speier. She has appeared on and been cited by numerous media outlets and has testified to Congress representing POGO. Her writing has appeared in such venues as TomDispatch, Counterpunch, and USA Today.