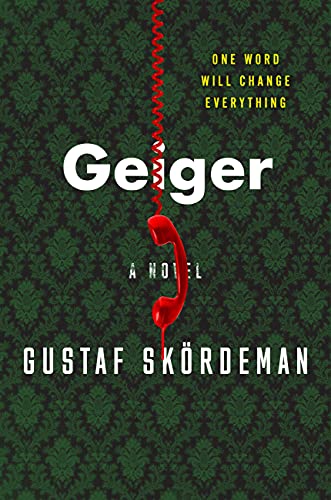 “First published in Sweden in 2020, the novel is eerily prescient in its depiction of Russian duplicity and ruthlessness. It even has a nasty thing or two to say about Vladimir Putin . . .”

This clever novel could have begun with what is called an “arresting opening.” To wit: Agneta Broman in Sweden answers a landline, seldom-used, ages-old with a rotary dial. A heavily accented German voice says only, “Geiger.” Agneta calmly puts down the phone, recovers a gun and silencer, shoots her husband of 35 years in the head, and then disappears.

The seven opening pages of background that readers have to wade through could have instead been explicated after this gripping opening action.

It is one of the novice mistakes in Gustaf Skörderman’s debut novel, but these pale in comparison to his expert weaving of geography and historical fact in an otherwise taut geopolitical thriller set in contemporary Stockholm, reaching back to the start of Communist East Germany, and centered on how Sweden’s continued neutral stance resulted from East German and KGB manipulation despite contrary pressures from Allied countries.

Translated by Ian Giles, the novel, first published in Sweden in 2020, is eerily prescient in its depiction of Russian duplicity and ruthlessness. It even has a nasty thing or two to say about Vladimir Putin, whose recent actions prove Skörderman correct if not clairvoyant.

One of the surprising reveals among the backstabbing, betrayal, and counterespionage within the twisting plot (another of Skörderman’s strengths) is Sweden’s “Far–Advanced” decades-long cooperation with NATO, “an alliance that was kept secret from the Swedish people.”

The husband whom Agneta murders, Stellan, is the most famous television personality aside from Sweden’s king. His shows and radio programs are quoted in the markets and discussed around office water coolers. To an adoring nation he has been “Uncle Stellan,” a national role model whom people thought nothing of stopping on the street to chat and shower with their admiration.

But oh, what a dark past Stellan Broman has, as does his wife Agneta, although unbeknownst to either of them the two diverged sharply along political lines.

Stellan’s manipulated pedigree involves multiple families, adopted children, seemingly faithful servants, and political actors from ministers and secretaries all the way to past prime ministers who willingly played into Stellan’s repulsive collection of tawdry Kompromat involving underage girls. All for the ostensible “East German Cause.”

But was it? Did it work and was it a durable success? Not quite, it seems.

Following Agneta’s mysterious phone call concerning “Geiger,” long–term Soviet agents, dormant for decades, become reactivated. She is now in a chase for her life, difficult at her age but the tradecraft learned when she was young still serves her. Yet “in the life she had chosen long ago, there was no retirement age—now she realized all too clearly the downside of that.”

Agneta’s grooming involved “multiple generations, long-term marriages based on a fiction, brainwashing, and betrayal,” all marked by “the ruthlessness within which ideology makes people bend to its will if not always blindly.” When she captures one of the Soviet agents trying to kill her, she is almost shocked at “the depravity and ruthlessness of totalitarian regimes.”

“You spied on your own spies?”

“We spied on everything.”

The book delves into how Sweden remained a neutral country in the face of East German communism. Many Swedes had worked for the Stasi. Geiger was a code name. Was Uncle Stellan Geiger? He was certainly “a committed friend of East Germany” who threw “big parties at his house to which he invited all the important people” eager to bask in Stellan’s celebrity aura.

The real purpose of his showy, envy-inducing parties was for the purpose of blackmailing the cognoscenti whom he entertained. “That explains why the conservative governments didn’t break away from the policy of neutrality when they came to power.”

When at last the true histories of Agneta and Stellan are revealed, the truth of who they really are is much worse than one can imagine.

“What would her daughters say if they could see her now . . . Would they be able to understand who she was? What she was?” But then she had had born her children “as part of her cover, she was aware of that.”