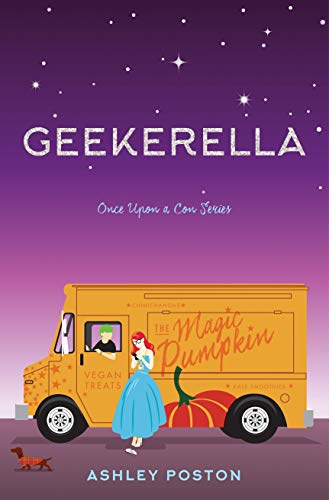 Geekerella is a straightforward retelling of Cinderella as a geeky fairy tale, and it couldn't be sweeter or more fun.

Ella is the orphaned daughter of two champion closplayers, stuck with her harsh and unfair stepmom and two twin stepsisters who don't want her around and do everything to make her life terrible.

Darien is a soap star getting his first big break as the new version of the iconic main character in the reboot of Ella's favorite show. She and her dad used to watch it, and he loved it so much he started a convention to celebrate it, so she's upset Darien got the part. Then he gets booked for the con and accidentally texts her, since they never took her dad's number down from the website, and they start a You've Got Mail-style anonymous romance while he's trying to prove himself worthy of the gig and she's trying to make it to the cosplay ball so she can win her way out of her awful home life.

It's not hard to guess how the plot will go, but the comfort of fairytales is that we do know how it comes out, and this is not a gritty one that tries to change that up. Since the plot is basically a play-by-play of the original, we can focus on how spot on the modern geek vibe is, and how neat the translation into this particular subculture has been. You can feel the love Poston has for all things geek, but she doesn't sugarcoat the bad side either—she just focuses on the good, because that's where the story is, and that's what Ella does. The result is a happy and loving look at fandoms coming together, of them saving people and uniting weirdos across the world, and of the struggle of reboots upending everything you thought you knew.

Mixing real fandoms from Star Trek to Firefly with the ones made up for the book, Geekerella is another in a growing line of love letters to geek culture and how important it can be for misfit girls. Ella is pinned down by her bad situation, but not beaten, and along the way of trying to get herself out of it, she makes awesome friends, reconnects with her parents' greatest achievement, and wins the heart of the movie star who's now head of her favorite story. It hits all the right romcom notes, and all the characters are interesting and have clear motives and points of view.

This is a quick read—I read it all in one day—but it stays with you. If you're a fan of Fangirl, or a fan yourself, this is the version of Cinderella for you. Elle knows her space shows, and drops enough names that this might sound dated in 20 years, but it also makes the Starfield story they're bonding over and living through feel real as the shows we know out here in our world do.

Ella is so compassionate and determined that you can't help but root for her. She's sassy and snappy and knows what she wants, and when things go wrong, it's moving and emotional. And the show she loves, and Darien now helms, sounds so cool we can only hope that, like Fangirl and Carry On, we get a followup novel showing us just how awesome it really is.