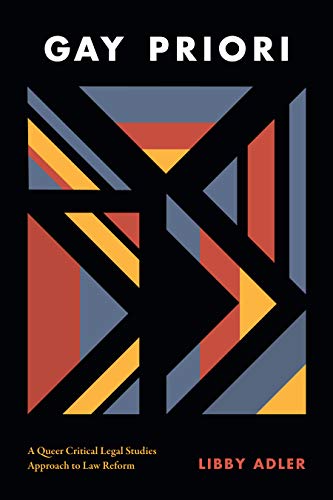 Why is it that academicians insist on writing books in an obtuse and opaque manner? Are academics incapable of writing in a clear, straightforward manner? Doing so would make their work more attractive to a wider audience rather than being either restricted to fellow academics or gathering dust on the bookshelves of an unsuspecting general reader. ’Tis a pity because the latter might benefit from the observations and opinions of these academics. Libby Adler’s new book, Gay Priori, while presenting interesting insights, seems destined to reside in obscurity.

Libby Adler is a Professor of Law and Women’s, Gender, and Sexuality Studies at Northwestern University, and Gay Priori is her latest work.

Whew! What a mouthful. And, this language does not provide the reader with a definitive statement of what the book is about. That lapse lies directly at the author’s feet.

Adler takes to task leading LGBT organizations for their failure to address basic societal problems such as poverty, homelessness, and youth in foster care and the impact they have on the LGBT community.

She begins by criticizing the decision by National Center for Lesbian Rights (NCLR) to help defend Hastings College of Law in the lawsuit brought by the Christian Legal Society. Instead, Adler believes NCLR should have opposed the ordinance proposed by San Francisco known as “sit-lie.” This ordinance was designed to prohibit people from sitting or lying down on city sidewalks.

Likewise, Adler criticizes the various LGBT organizations in their choice of challenges to laws and practices that discriminate against the LGBT community. In a nutshell, Professor Adler thinks these organizations should have sought to protect the marginalized members of the LGBT community including foster children, the homeless, and the poor.

“Gay rights advocates have hotly pursued the dream of formal equality, prioritizing antidiscrimination reforms and imagining the zenith of gay emancipation to be access to marriage. The discourse of LGBT equal rights that advances these objectives, however, produces myopia, so that access to marriage, antidiscrimination protection, hate crime legislation, and international human rights reforms that mimic American conceptions of equal protection come easily into view, while a broader array of law reform possibilities is eclipsed.”

Adler is a proponent of law reform and her legacy lies in that forum. This book seems to advance her views that law reform addressing homelessness, poverty, and hunger must take priority over all other issues.

The author admits that marriage equality and equal rights are the issues that bring in the money. Without significant financial contributions there would be no advances for civil rights. However, she also views these issues as preferred by upper class, white, privileged members of the LGBT community.

One problem with this book, and the author’s opinion, is that everything is in past tense. Marriage equality has been achieved (at least same-sex couples can get married; whether they are treated the same as married heterosexual couples continues to be a question). Many states ban discrimination based on sexual orientation and gender identity.

Adler’s position that LGBT organizations were wrong in pursuing marriage equality and civil rights and her belief that they should have gone after legal reform to help the marginalized segments of the LGBT community are fine, except it did not go down that way.

So, a reader may wonder, what’s the point to this book? Could Lambda Legal, NCLR, HRC and other national LGBT organizations have championed homelessness, poverty and hunger? Sure, but would it have made a difference? Unlikely.

Adler is talking about systemic problems that include members of the LGBT community among those affected. The organizations that Adler criticizes are not able to resolve these systemic problems. The rights and needs of the poor and the homeless have never been a priority of those who are able to provide remedies, namely federal, state, and local governments.

The marriage equality fight was ultimately successful because Lambda and NCLR bartered the interest in those issues into financial contributions. Without money, it is impossible to mount a successful challenge to anything. And, there is no money for combatting homelessness, poverty or hunger. There is no intestinal fortitude on the part of anyone—government, churches, society in general—to address them in a concentrated way required to ensure success.

Adler admits there is movement among the LGBT organizations to begin looking at the problems of homelessness, poverty and hunger within the LGBT community. This is a start, and while these efforts may have some impact, they will not eliminate the problems. This is a societal problem and there must be a societal solution.

Adler is a lawyer and can initiate legal action challenging the abuses experienced by LGBT youth in foster care or discrimination against transgender individuals in homeless shelter programs. Yet nothing in the book indicates she has done anything. She criticizes others for selecting the wrong issues to focus on but does nothing herself to rectify the situation she discusses. It is tiresome to listen to people criticize others when their own activism is lacking.

She states that the American Civil Liberties Union and Lambda Legal have outsized influence and “tend to be well funded, bureaucratized, and professionalized” and have “access to elites and maintain expertise not only in law but also in using the press to advance the interests they deem most important.”

In comparison, according to Adler, “[T]he influence of smaller, less well-resourced grassroots organizations with a higher rate of turnover suffers.” The statement is another head-scratcher that leaves the reader wondering what the author is claiming.

Adler’s protestations and critique need to be heard, but blaming LGBT organizations is not constructive. Her statement, “Movement lawyers who represent the LGBT community’s interests should embrace a two-fold moral imperative. Their agenda should prioritize the interests of the poorest and most marginalized sectors of the community and they should redirect their considerable talent and dedication to a method of lawyering that attends to those populations’ regular and life-shaping encounters with the law.”

Many lawyers within the LGBT legal community are familiar with this “you should do this for the community.” However, Adler fails to address the issue of who pays for the lawyers to “redirect their considerable talent and dedication.” It may be crass to consider but everything revolves around money. Without it, “talent and dedication” are irrelevant.

Adler should take her own advice and lead the way. She could use her position to achieve the legal reforms she demands. She could raise the money to fund the litigation that will force the government at all levels to eliminate these societal defects. Otherwise, this book is nothing more than an academic exercise and will lay gathering dust on someone’s shelf.