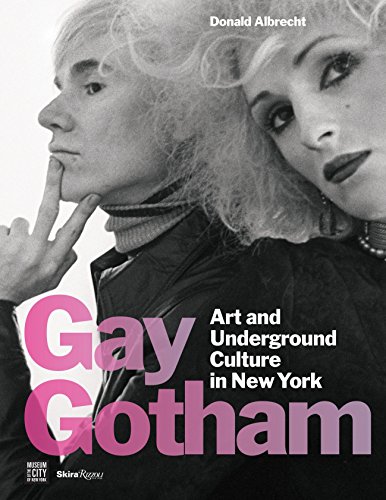 The GLBTQ art book to have this year is Gay Gotham: Art and Underground Culture in New York by Donald Albrecht and Stephen Vider, the companion book to the exhibit at the Museum of the City of New York. This volume is a visual extravaganza of rare photographs and art from the gay undergrounds; it rescues and explores GLBTQueer history that has been summarily erased or ignored but is nonetheless an indelible part of New York’s arts and cultural heritage.

The book profiles famous GLBTQ artists and as far back as 1910 with heiress Mabel Dodge’s gay salon to the fearless artists and activists fighting for their lives and their communities on the streets of Manhattan in the ’80s and ’90s. Along the way some of the most famous and infamous are given their due including Mercedes de Costa, George Platt Lynes, Leonard Bernstein, Richard Bruce Nugent, Andy Warhol, Harmony Hammond, Robert Mapplethorpe—but even more impressive in chapters is that Albrecht and Vider give equal attention to the underground scenes from 1912 to the mid-1990s.

The National Gallery in Washington’s HIDE/SEEK exhibition impressively explored visible and hidden gay representation of painters and sculptures, but Gay Gotham covers that ground and much more as a panoramic of gay aesthetic in art, theater, dance, music, photography, cabaret, and public art and how these arts intersect with everyday life in New York. Many of the images in the book are from private collections as Albrecht and Vider visually New York gay culture vis-à-vis GLBTQ civil-rights activism.

The authors annotate the images and artifacts with fascinating essays about famous and often overlooked visionaries like artist Harmony Hammond as the architect of lesbian feminist art activism.

Art and photography loom large, and there are works by some of the most famous paintings and photographs of the last century such as Harlem artist Beauford Delaney’s abstract portrait of a young James Baldwin, Charles Demuth’s stunning painting “Night at the Baths,” and Paul Cadmus’ depiction of a Greenwich Village “Cafeteria” celebrating expressions of open sexuality. A gorgeous photo essay of the work of George Platt Lynes whose homoerotic dance photographs are among the beautifully transferred prints in the book.

The haunting black and white photo portrait of Keith Haring hunkered in the corner of a subway car after he had just made what will be populous graffiti art on its grimy walls. Underground heroes like Assotto Saint, a visionary black artist, poet, performer, and playwright, is given his due in the book. Portraits of such legends as the inimitable Gladys Bentley holding drag-king court at the Ubangi Club in Harlem in the 20s to the brilliant voguers from the House of LaBeija burning the drag ballroom floors of the 90s.

Theater looms large uptown and downtown with focus the creation of West Side Story whose artistic creators Leonard Bernstein, Arthur Laurents, Jerome Robbins, and Stephen Sondheim were closeted gays at the time. Albrecht dissects how the show spoke to gay New York audiences who knew the coded messages or could pick up on the outsider symbolism. Interesting, but overreaching at the expense of more influential gay theater artists like queer actor-writer-director Charles Ludlam, who is only mentioned in passing. Ludlam’s Ridiculous Theatrical Company was hugely influential to a generation of theater artists.

But despite a few such omissions, Gay Gotham is an altogether captivating rescued history of GLBTQueer New York. Kudos to designers and layout of the book, the photography and visual art transfers are expertly done.