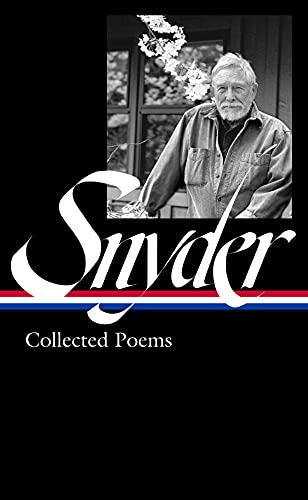 “so important to an understanding of American thought and the landscape that formed it.”

For the last 40 years the Library of America, a nonprofit publisher, has attempted to establish and radically expand a canon of American literature. The books are meticulously edited, usually with helpful endnotes and chronologies, printed on fine paper, and beautifully bound. There is little controversy when they pick their books from among the great dead, even from those previously ignored. They enter more uncertain areas when they pick from writers who are still alive and actively working. There can be little doubt that the work of Gary Snyder belongs in this company.

Snyder has been a cultural figure central to many influential movements that have shaped American thought over the last 70 years. Because of his friendships with Allen Ginsberg and Jack Kerouac, he was associated early on with the Beats, even though he never quite fit into that group. He was from a rural background rather than an urban one; he was comfortable spending long periods alone; and he was out of the country for much of the late ’50s and early ’60s when the Beats had their greatest influence.

During that period Snyder lived in Japan, often in a Zen monastery, where he did a deep dive into the Buddhist tradition and Asian languages. When he returned, he was one of the most informed popular explicators of Buddhism to America.

He moved to the High Sierras around 1970, built his own place there, and has stayed for these last 50 years. His writings, poems, and essays about that place and about the importance of personal rootedness, have helped shape policy and the movement known as Deep Ecology.

All of these ways of engaging the world appear in the poems that are collected in this volume. They all inform what might be Snyder’s greatest contribution to our uncertain national canon: He is one of the main writers of the American West. The landscape on the far side of the Rockies is the landscape that provides the images to his imagination. He looks west, across the Pacific rather than east across the Atlantic, to find his necessary cultural influences.

This Collected Poems feels like an expansion of imagination rather than a formal progression. The first poem, “Mid-August at Sourdough Mountain Lookout,” from Snyder’s first book, Riprap, published in 1959 establishes a way of looking at the world that echoes throughout these 1000 pages:

“Down a valley a smoke haze

Pitch glows on the fir-cones

Across rocks and meadows

I cannot remember things I once read

A few friends, but they are in cities.

Looking down for miles

In his notes at the end of that first book, Snyder writes, “The idea of a poetry with minimal surface texture, under the bank, a dark old lurking, no fancy flavor, is ancient.” That is the working aesthetic that is clear throughout this book, all the way to the final poem from Snyder’s most recent full collection, This Present Moment,” published in 2015. That last poem, “Go Now,” is an elegy for Carole Koda, the poet’s wife. It is not a poem that is easy to read because Snyder looks at death and the dead body of his beloved with the same clarity he had when he looked out over that landscape in the North Cascades so many years earlier. The poem ends with the poet and his son looking one last time at the body, reflecting on the Buddhist notion of non-attachment:

“Kai and I one more time

—this is the price of attachment—

‘Worth it. Easily worth it—'

Still in love, being there,

seeing and smelling and feeling it,

worth even the smell.”

Between these two points, this Collected includes all of Snyder’s poems. Occasionally polemical, even willfully didactic, there are the famous books from the late 1960s and early ’70s, including his Pulitzer Prize-winning Turtle Island. There is the extraordinary Danger on Peaks, where the 1980 eruption of Mt. St. Helens, a mountain Snyder climbed several times in his life, is a powerful metaphor for the notion of impermanence.

Snyder worked on his monumental poem, “Mountains and Rivers Without End,” for decades. In this poem he combines much of what he learned in his long time in Japan with the life he lived on the West Coast. At times it can be a difficult poem, one that demands we find the associations between very different bodies of knowledge. This volume includes the original notes Snyder used for the 1996 publication as well as new notes he helped prepare for this volume. They help explain things that previously were a bit opaque.

Volumes of collected poems are often kept on the shelf so their readers can dip into them from time to time to remember a poem or be reminded of a poet. Gary Snyder’s Collected Poems can actually be read all the way through, from beginning to end. The poems, evocative and filled with the knowledge of things we might not know, are nestled in the context of this remarkable work and personality, both so important to an understanding of American thought and the landscape that formed it.