The Games: A Global History of the Olympics 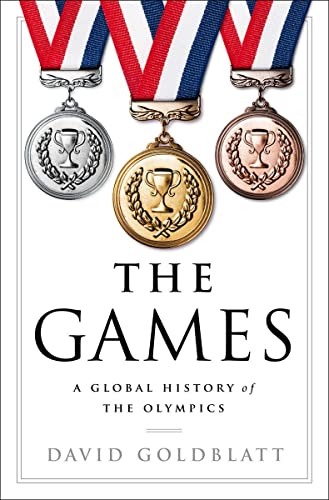 Renowned sportswriter David Goldblatt’s encyclopedic history of the Olympic Games is a timely and impressively expansive view of arguably the world’s most beloved sporting event, as he chronicles the games from historical, archeological, social, and cultural perspectives.

Goldblatt’s tome is not simply a cataloguing of well-known Olympic moments, though there are many of these wonderfully described; his book covers the full and wide-ranging expanse of Olympic history. Beginning with the ancient games, the development of alternative games, and the reestablishment of the modern era Olympic games, the author’s early chapters meticulously build a solid foundation of the Olympic movement for the reader.

The beginning of the early modern games, driven by Frenchman Baron de Coubertin with the holding of the 1892 Olympics held in Athens, Greece, was an immediate success, drawing more than 50,000 people to the opening ceremony. Goldblatt moves the reader from that momentous event to then craft the layers of the full story of the games.

Under his masterful hand, the book moves deftly back and forth from well-known Olympian sports facts to artfully described vignettes of multiple and varied personalities who participated in the games over the past 120-plus years.

Events like Mark’s Spitz’s seven gold medals at the 1972 games; Tommie Smith and John Carlos’ black power salute in 1968 in Mexico City; Bob Beamon’s stunning record-breaking long jump at the same 1968 Olympics; and Jesse Owen’s performance at the 1936 Berlin, Germany, Olympics are noted but not unduly dwelled upon, rather placed within the scope and overall history of the Olympic games.

In addition to describing these interesting individual feats he also provides surprising “I didn’t know that” facts. These include women not being allowed to run an Olympic race longer than the 800 meters until 1968 since they were considered too delicate to handle a race any longer than that distance, as well as a runner (an American) being disqualified from winning the gold medal in the marathon in the St. Louis games for hitching a ride on the back of a truck for at least part of the way.

Goldblatt also spends considerable time writing about the political implications of the games, drawing the comparison to their impact on strong male leaders like Adolf Hitler during the 1936 Olympics and the 1988 games of South Korea’s Chun Doo Huan as well as the deaths of the Israeli athletes in Munich at the hands of the Palestinian Liberation Organization (PLO).

But author Goldblatt saves his best writing for his brilliant personal observations, such as his description of the debut of the future game’s mascot of the Atlanta Olympics, initially dubbed “Whatizit,” later redesigned and changed to “Izzy” as a “demented blue, anthropomorphized foam earplug.”

Goldblatt’s The Games magnificently captures why the Olympic games, despite the politics, corruption, financial, and performance judging controversies, continue to be phenomenally successful, watched by literally billions of viewers every four years.

He has created the definitive book on the Olympics, which should be on the reading list of anyone with a passion for learning the full story of the Olympic games.