A Game of Birds and Wolves: The Young Women Who Played to Win World War II 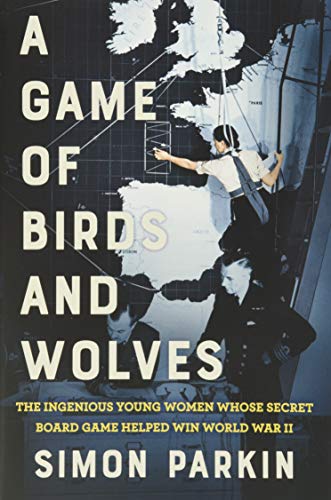 “. . . a masterful job of evoking the sweep of this vital piece of naval history in both broad strokes and the telling detail.”

Simon Parkin weaves together several stories in this one well-crafted book. A Game of Birds and Wolves opens with a riveting description of Colin, a young English boy, who is on a journey by ship away from bombing in London to safety in the United States. At least, it's supposed to be a flight to safety. “The trip, designed to evade danger at home, would not be without its risks at sea. All year U-boats—short for 'Unterseeboot,' the German word for submarine—had been attacking Allied vessels wherever they found them.”

In fact, the boat is torpedoed and sunk. A newspaper headline screams “Nazis Torpedo Mercy Ship, Kill Children.” Very few of the refugee children aboard survive. The reader is relieved to read that Colin is one of them, though we never learn what happens to him after his rescue and return to England. Instead, the book uses the sinking as the dramatic start to explaining U-boat tactics. Parkin is a gripping writer, describing the living and fighting conditions aboard the claustrophobic submarines. He presents vivid characters in the commander of the U-boat fleet, Karl Doenitz, and his most effective captains.

Then the book shifts attention again, this time to the Wrens, the Women's Royal Navy Service. Like many of the military groups comprised of women during WWII, the group took on some major responsibilities, including flying transport planes. At its peak, there were more than 75,000 women in the service. They took on real risks—100 of them died in service, including many when their transport boat was sunk by U-boat attack, a horrible disaster that Parkin does justice to in one chapter.

Parkin again creates clear characters and evokes a world. “For all of war's great horrors, service in the Wrens offered these women an unexpected freedom from the strictures of their Victorian fathers. For many young men the Second World War wiped out a multitude of possibilities. For many young women, however, war obliterated previously impenetrable barriers. In assuming an active role in the war effort, Wrens slipped the expectation to marry early, remain at home, and bear children at the earliest opportunity. Joining the Wrens was something akin to setting off for university, a profound loosening of the centuries-old constriction of female prospects.”

The final thread in the book's tapestry is Gilbert Roberts. Another well-drawn character, Roberts was a captain in the British navy who had been forced to retire when he got tuberculosis. He is called out of retirement to figure out a winning strategy against the U-boats. Britain was losing far too many supply ships to the Germans, threatening the island with starvation. Roberts develops a war game, using a map on a board and tokens to figure out how the U-boats are so effective.

And here is where all the threads intertwine. The Wrens are assigned to help Roberts run his games. The subtitle here is misleading since the game is invented by Roberts, not the Wrens. They become adept players and important contributors in winning the war. The Wrens, Roberts, Doenitz, the U-boat captains, and the British navy all meet on the complicated gameboard. The game shifts to real life as the Great Battle for the Atlantic plays out. It's a tipping point for the war at sea, with Roberts demonstrating the lethal effectiveness of his new strategy.

Pulling all these threads together is no small feat. Parkin doesa masterful job of evoking the sweep of this vital piece of naval history in both broad strokes and the telling detail. Every war buff will want to read this book. And anyone interested in strategy would be wise to read it as well.