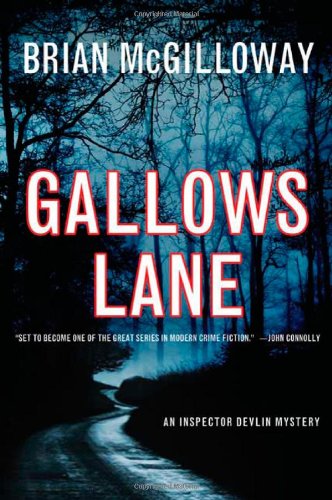 Borderlands, the book that kicked off the Devlin series, was nominated and short-listed for a CWA Silver Dagger, translated into German and Japanese, and has recently been released in the U.S. and Australia. And in the second of the Inspector Devlin series, Brian McGilloway brings us the powerful Gallows Lane. Really, he’s doing the Northern Irish crime fiction scene proud.

As with Borderlands, Gallows Lane opens with the discovery of the gruesome murder of a teenage girl. The difference in this case being that the atrocity has been committed very much within Gardai jurisdiction. The similarity? Devlin is going to have a hard time solving the case and will attract the wrong kind of attention to himself and the people he cares about in the process. As he liaises with the Dublin NCIB, the PSNI and British Intelligence, and loses popularity among his colleagues when he doubts the authenticity of a high-profile arms and drugs find, the elements to this expertly layered plot come together perfectly to offer something special.

Gallows Lane is a much more ambitious book than Borderlands, and McGilloway juggles the interweaving plots with casual ease, never fumbling once. And he seems to have refined his voice. While Borderlands was truly enjoyable, Gallows Lane goes further. It has that elusive je ne sais quoi quality that kept the book constantly within hand’s reach for the four short days this reviewer gorged on it. It’s hard to figure out the magic behind the “unputdownable book,” but this year the work of Ken Bruen, Adrian McKinty, and Ian Sansom, to name a few, have delivered; and now, Brian McGilloway seems to have learned the formula. Come on, lads. Share the wealth. What’s the secret?

Also intriguing is Devlin’s character development. He’s gotten a little cynical since Borderlands, but at times he conveys this cynicism with smirk-inducing humor. At a funeral on a sunny day he thinks to himself, “So much for pathetic fallacy.” Isn’t that lovely? There are more cracking one-liners peppered throughout the novel, but you can discover them for yourselves.

Along with his early-onset cynicism, one is left with the feeling that we’re being subtly prepared for further straining of his marriage in the future. Gallows Lane offers many personal ups and downs as Devlin’s wife, Debbie, is shown to still hold resentment for her husband’s past with one Miriam Powell, and at times struggles with the pressure of the dangers Devlin’s job can bring to the family home. And Devlin often notices and enjoys beauty in other women. It’s very much an underlying characteristic, and used to great effect by McGilloway, but as far as I can see, Devlin is reading the menu a little too often . . . and his mouth is watering.

If you’re looking for the latest and greatest police procedural crime fiction, get on to McGilloway’s work right now. A mere two books into the Devlin series, and he’s proved himself a heavy weight in the genre. Mark my words, McGilloway is destined for the heights of success enjoyed by the Colin Dexters and Ian Rankins of this world, and he truly deserves it. Bring on the third Devlin novel, Bleed a River Deep.