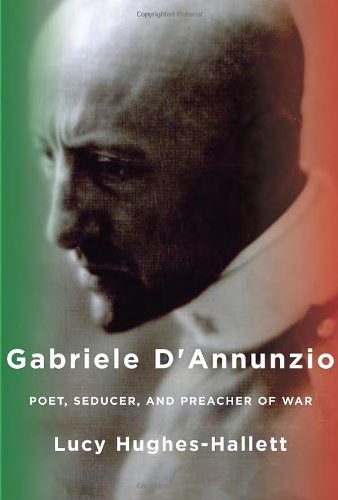 This biography, about a man whose name means literally “Gabriel of the Annunciation,” shines a light on one of Italy’s foremost poets and literary figures, as well as being a “preacher of war.”

It is about a man who courted celebrity; who obsessively collected everything from fine art to greyhounds, leaving a line of creditors stretching across Europe. He was so enthralled by war “his incendiary oratory” was a driving factor for Italy joining WWI, as he called upon “teenage conscripts . . . to die because the blood of those who had already died called out to them from the earth to emulate their sacrifice.”

He was someone who bravely flew in the flimsiest of pioneering aircraft during that same war, dropping bombs and propaganda on the enemies of Italy.

He marched into the Croatian port of Fiume in 1919 and established a satellite city-state for Italy, refusing to stand down even when an agreement was accepted by the Italian government and the people of Fiume.

He was regarded as a role model by and for Mussolini. And last but certainly not least, he was a serial seducer of women throughout his entire life, a misogynist who showed no regard for the lives he copulated rampantly through. In fact, his respect for all human life, other than his own, was derisory.

As one might imagine, there is certainly no shortage of raw material for Ms Hughes-Hallett as the dedicated self-publicist not only published prolifically during his lifetime, but also kept diaries and notes recording every event, opinion, and relationship.

This is where the problem with the book begins: the plethora of information is overwhelming. The second problem is that Ms Hughes-Hallett has decided to present this myriad of (albeit fascinating) information in a nonlinear fashion.

Gabriele d’Annunzio was born in 1863 in the Abruzzi, an area of Italy “blocked off by the Apennines from the great cities of Italy’s western seaboard . . . bounded by bald mountains where bears and wolves still live.”

But d’Annunzio’s family was far from humble. His father was a wine merchant and landowner and the Mayor of Pescara during d’Annunzio’s childhood. His mother Luisa hailed from even higher social status.

Yet his childhood is described as “loveless,” and Ms Hughes-Hallett asserts: “children obliged to fend for themselves in a loveless environment grow a shell around their hearts which can be hard to crack open later. D’Annunzio matured into an adult notably lacking in empathy.” This is something of an understatement.

Ms Hughes-Hallett makes no comment about this, but she does laud his awareness of bodies describing it as “unlike that of any of his literary peers.” He also had a knack of giving lovers syphilis, as well as broken hearts and marriages!

Set against a backdrop of his calamitous affairs—both financial and sexual—Ms Hughes-Hallett explores D’Annunzio’s fame, fortune, and success—all of which grew as exponentially as his prolific writing of fiction.

But as World War I loomed, the writer of fiction became a propagandist, and d’Annunzio threw his weight behind urging neutral Italy into the war.

And it is d’Annunzio’s eulogizing of the glories of war and shedding of blood that can be so unpalatable. He compares soldiers marching to the front as “dead men walking” like a herd of bullocks he had passed earlier. His “Ode to the Latin Resurrection” was a call to arms, urging Italians: “This is your day, this is your hour Italy . . . unhappy be you who hesitate. Unhappy be you who do not dare to cast the dice.”

In between lusting and blood lusting he also found time to be fascinated by modernity and progress. He flew with the early aviators and foresaw the huge military significance of aircraft. He also imagined how “just as a still image could be captured by a camera, so some day movement and even sound, might be similarly recorded.”

It is not necessary for a reader to empathize with or like the subject of a biography. If that were the case, volumes on Hitler and Tony Blair would be thin on the ground.

But for a study of such immense proportions, the staying power required demands more than a casual admiration for the man’s work or his exploits. This despicable little man was reckless with the lives of others, whether on the battlefield or in the bedroom.

Yes, his mastery of inspiring and inciting words is undeniable. But behind those words is a man who failed as a human being. One might consider that Ms Hughes-Hallett could have done more than report the facts of his life in such enormous detail.

A meticulously researched and written volume on a unique if dislikeable man, this book is more suited to the academic than the curious admirer of d’Annunzio’s work.