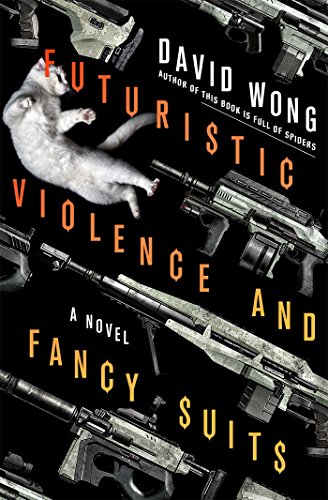 Futuristic Violence and Fancy Suits is not for everyone. Only those who enjoy plenty of action, humor, comedic gore, fun futuristic gadgets, and a healthy dose of satire when it comes to America’s, and the world’s, obsession with documenting every last second of life to prove it is really happening and that you are worth something other than just the space you take up. So for those people, it is the perfect book.

David Wong’s writing style is a great mix of Tom Robbins meets Philip K. Dick. You could throw in some Christopher Moore as well. Wong’s sense of comedic timing is honed to perfection from his time spent as Executive Editor at Cracked.com. He has his finger on the pulse of popular culture, current trends, and how quickly both can become absurd and take civilization to places that it should not go.

Futuristic Violence and Fancy Suits is the story of Zoey Ashe, a barista, trailer park denizen, and all around slacker who really has no one in her life other than her stripper mom and cat named Stench Machine. Stench Machine is a literal moniker due to the feline’s constant stink. It is also a tell-tale sign that this novel is not going to be a straight up scifi novel that takes itself very seriously.

After a day of preparing to get her butt off the couch to go to work, then trying to get her cat down off the roof of her trailer even though the cat left the roof a long while before, Zoey suddenly finds herself the target of a multimillion dollar bounty. The bounty is for her to be alive, but dead later is not a problem once she has served her purpose. Thrust into this nightmare, Zoey must go on the run from a cyber-enhanced serial killer that likes to slowly eat his victims piece by piece over weeks. And he isn’t the biggest problem.

Turns out that Zoey’s estranged father was quite the corporate pirate/gangster in a city known as Tabula Ra$a (dollar sign intentional). He has since passed and left everything to Zoey, specifically what’s inside his vault. Now every gangster, lowlife, cult, and two-bit criminal in the Las Vegas-esque sin city wants Zoey. More importantly they want what’s in the vault and will do whatever they have to to Zoey to get it.

Lucky for Zoey, her late father’s business associates decide they want her more and take her in. For their own reasons, of course, and not so much for Zoey’s wellbeing. After some seriously messed up encounters with a man in nothing but goggles and baby doll heads, the slow food serial killer, and ten times more hired guns and assassins than a Quentin Tarantino movie, Zoey discovers her true purpose and why she has been brought to Tabula Ra$a—to stop the psychotic frat bro cult leader known as Molech. It’s either that or get ripped apart alive while billions of people watch across the world on the Internet. Zoey is partial to the stopping over the getting ripped apart.

Fast, fun, brutal, hilarious, and quite thought provoking, Futuristic Violence and Fancy Suits is highly entertaining and well worth every page turn. Whether a reader is familiar with Wong’s work or not, this novel is indicative of the writer’s talent for mixing wit and violence.