The Future of Capitalism: Facing the New Anxieties 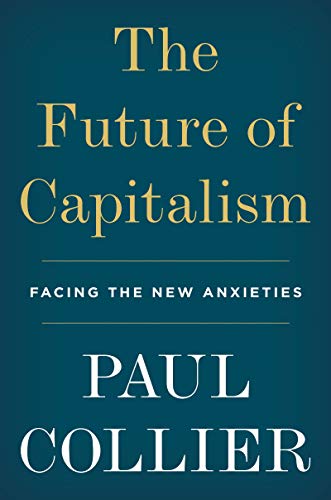 “Collier endorses capitalism for the long haul because it ‘has the potential to lift us all to unprecedented prosperity.’ However, he writes that ‘capitalist societies must be ethical as well as prosperous.’”

Paul Collier has written an ambitious, important book about how to understand and address the new economic anxieties faced worldwide by capitalist economies. These anxieties have led to the rise of ideologues and populists across the globe according to Collier. More specifically, they have led to major events ranging from the election of President Trump to Brexit.

Collier endorses capitalism for the long haul because it “has the potential to lift us all to unprecedented prosperity.” However, he writes that “capitalist societies must be ethical as well as prosperous.” He believes that modern capitalism is “morally bankrupt” because it has failed to give us neither “a sense of belonging and esteem” nor “a sense of purpose.”

Modern capitalism suffers from three great divides by Collier’s reckoning. The first is the geographic divide between the “booming metropolis” like London or New York and the “broken provincial cities” such as Sheffield in the United Kingdom, which was once a center of steel manufacturing, and Collier’s hometown.

The second is the class divide between the “prospering educated” and the “despairing less educated.” The third is the global divide between those who benefit from the increased trade and immigration brought on by globalization and those who are harmed by it.

The metropolises are booming because their large-scale markets allow workers to specialize, which, in turn, leads to significant productivity gains. It is this high productivity that enables employers of highly skilled specialists to offer such high incomes. Collier, however, concludes that these highly-skilled workers in the metropolis do not deserve to keep all of that income because they benefitted from the “collective achievement” of all the people working in the metropolis; they benefitted from business clusters or “agglomeration.”

For that reason, metropolis workers should pay for closing the geographic divide between the metropolis and provincial city. In a blunt tone Collier states that “it is a fitting response to the new urban arrogance.” Specifically, to close the geographic divide, Collier calls for higher taxes on the incomes of highly skilled metropolis workers and, importantly, proposes to use the tax proceeds to help the broken provincial cities. For example, higher taxes in New York City would be used in a city like Detroit to attract and build new clusters of businesses.

One is that highly educated people tend to marry other highly educated people, and they invest a great deal of their time and money in their children. That investment ranges from simple, powerful actions like reading to their children more often to investing in new technology that gives their children further advantages. For the less educated, the gap can be made even worse based on other social realities such as extramarital births; as Collier suggests, children are not equipped to raise children.

While university-level education may be the culprit in creating this class divide, Collier is among the growing number of policy makers who see that the solution, at least in part, may be found in another form of education: technical vocational education and training (TVET) in the failing provincial cities. This education must be led closely by local businesses in cooperation with local colleges. Collier points to Germany and Switzerland as places where this sort or education is effective and the workers with these skills are held in high esteem.

The global divide is created between those who benefit and those who are harmed by trade and immigration. Economists in general have been consistently in favor of globalization because the resulting trade, if based on comparative advantage, yields benefits to countries on both sides of the transaction on net. Benefits on net, however, do not mean that no one is hurt by this trade in both developed and less developed nations. So, too, immigration may benefit a country on net, but individuals are economically harmed by it in both the destination and origin nations.

Closing these three divides is the top priority for getting capitalism back on track. Central to Collier’s approach is that “reciprocal obligations are decisive for wellbeing.” He writes that each new right “must be married to its new obligation.” We also must choose the entities to define and implement the reciprocal obligations.

Collier argues convincingly that we should not construct our “shared identify” based upon our values because the result is that we only interact with those with whom we agree and “these value based echo-chambers are tearing Western societies apart.”

Instead, Collier suggest we construct our “shared identity” on “belonging to a place.” It is our nation that gives us this sense of “belonging” and allows patriotism, not nationalism, to drive our actions across the globe. It is intriguing and hopeful to think that patriotism could lead us to the compromises that bring our nation and the world together.

Again, this is an ambitious book that proposes challenging efforts to reduce the three great divides. We know, for example, that winning approval for taxes on New York City residents to pay for programs in cities like Detroit would be a political challenge. We know the effort to actually create new clusters of businesses in distressed cities will be a technical challenge. Collier acknowledges that this one book cannot present all the detail that will be needed to succeed with his proposals.

Collier closes with optimism. He reminds us that the world came back from another more frightening failure of capitalism—the Great Depression—which led to the golden years of 1945 to 1970: “We can do better” he writes, “we once did so, and we can do it again.” He surely is right to remind us of the extraordinary accomplishments in the wake of the Second World War. The most significant challenge, however, may be to identify, outside the fresh memories of global war, a new motivation for a “shared identity,” a “sense of purpose,” and a “sense of belonging and esteem.”