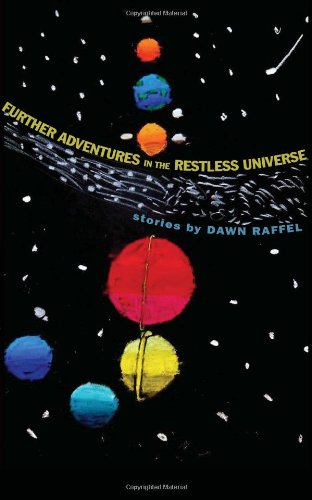 Further Adventures in the Restless Universe is a small book, a mere one hundred pages. But what it lacks in size, it more than makes up for in literary content. Dawn Raffel’s prose isn’t really prose at all—the words come from somewhere between verse and étude. The cover blurb states that, when she was a very small child, Raffel’s father “used to read to her nightly from The Restless Universe—a layman’s guide to physics, by the Nobel Laureate Max Born. This may explain a lot because, although “she didn’t comprehend a word of it,” the influence of matter, energy, and life and their motion through space and time can be felt throughout Further Adventures.

The book consists of twenty-one stories, or rather streams-of-consciousness narratives. One cannot really describe each story individually, they are too brief to do so—the longest is about a thousand words—however, as a whole, they include themes of youth, motherhood, death, family, childhood, marriage, relationships, childbirth, and other topics, which are beautifully and minutely observed. The brevity of the stories forces economy with the words—single word sentences, one-sentence paragraphs, syllables perfectly apportioned, disjointed fragments of voice—like flashes of something that’s partially recalled, yet ultimately unrecallable.

But there’s also something else, something essentially cosmic in proportion, yet observed at its quantum essence—something atomic, sub-atomic, genetic, Beckett-esque in its nihilism, yet all-encompassing. The loneliness of DeLillo’s Body Artist is here, the crowded isolation of Donleavy’s Fairy Tale of New York, the forlorn half-expectation of MacNeice’s innocent, scanning the stars. “The child who died used to follow us home;” “In the book of the night, the man and woman sleep and oversleep until night turns to evening”—this reviewer could offer a million quotes, but it wouldn’t be enough to explain. The quotes are interspersed with comments and phrases so ordinary, so bland, that they become no longer ordinary in the context of their surroundings, but visionary in the context of what surrounds them.

There’s also humor, “When our father died, there was no one who knew where the car was parked.” The book is essentially female, and the little strophes of melodious narrative may perhaps be suggestive of some larger composition. At first sight the stories seem self-contained, not connected, sure of themselves. But, on closer examination, there seems to be a tenuous thread running through—almost imperceptible . . . linking—maybe it’s just the voice, the narrator, but it could be more than that—it has to be more than that. Of course it does! This reviewer’s favorite is No Place on Earth.

In the end Raffel says it best herself, “There is no end.” Perhaps she did comprehend the readings of The Restless Universe after all. In the end you stop reading—and just listen.