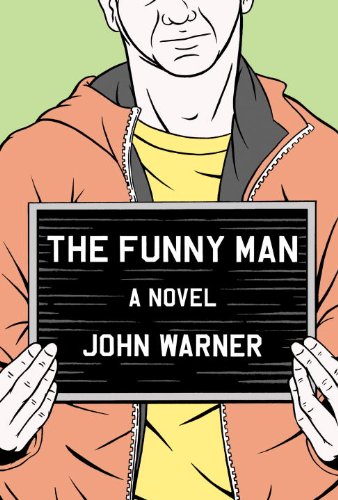 “. . . the strengths of this book are so powerful. . . . The Funny Man puts John Warner among the most perceptive and edgy chroniclers of an increasingly coarse American culture.”

An unnamed “Funny Man,” a comedian of middling ability, achieves meteoric fame based on a gimmick, overdoses on his fame, and now stands trial for murder. His cynical attorney enters a plea of “not guilty by reason of celebrity,” arguing that modern America turns celebrities into lunatics who cannot be held responsible for their actions. The rise and fall of this Funny Man and his carnival trial comprise John Warner’s raucous debut novel, The Funny Man.

Anyone who knows a little about Sam Kinnison, Richard Pryor, or Lenny Bruce understands that comedians can be more sad than funny. Mr. Warner works this vein: his Funny Man achieves fame by dumbing down his material and exploiting a cheap signature gag by repeating it again and again. The comic loathes his signature gag more and more as audiences keep demanding it. He loses his family and innocence as he rides his gag to fame and fortune. (The gag is not revealed in this review in the interest of not spoiling the book.)

Despite the grim plot line, The Funny Man is a funny book. Irreverent one-liners fill the first half of the book. For example, the Funny Man commits comic heresy by admitting he hates Abbott & Costello: “Seeing those two stupid assholes do ‘Who’s on First’ makes me want to jump through the television and knock their heads together. Draw a diagram f*ckwads.”

Train-wreck humor populates the second half of the book: The Funny Man develops a reality TV show in which his valet kicks unsuspecting people and then gives the victim a $1000 to sign a release and laugh about the incident on camera. Like Howard Stern or Sasha Baron Cohen, Mr. Warner understands the nexus of cruelty and humor. It is no surprise to see Stern’s right hand, Artie Lang, thanked in the book’s acknowledgements. The humor of the Funny Man character and real-life Artie Lang are indistinguishable

But it is supporting characters that deliver the book’s two signature moments. First, Barry, the Funny Man’s focus group-driven attorney, lets the prosecution roast the Funny Man because the insanity-by-celebrity defense is premised on proving celebrity depravity. Barry counsels that the jury needs to see this because “deep down, we don’t want our villains vanquished.”

Second, the Funny Man’s beautiful co-star in the terrible movie that jolts him to stardom wants to have sex with him for “celebrity arbitrage.” She reasons that one of them will make it big, and the other will benefit from the resulting publicity when their affair is revealed to the tabloids.

This reviewer offers two small cautions about The Funny Man. First, the cynicism at the core of the book is palpable and perhaps a wee bit overdone at times; Mr. Warner won’t win any awards from the Optimists’ Club for his underlying assumptions about modern America.

Second, The Funny Man is longer than necessary. The backstory is well done, but there’s more of it than the plot needs; the same criticism can be offered of the “White Hot Center” scenes in the second half of the book. If this 280-page book were 230 pages, it wouldn’t be diminished. But these are small cautions because the strengths of this book are so powerful.

The Funny Man joins a short list of intelligent, dark comedies about self-loathing main characters whose success is built on the poor taste and/or low IQ of the American public. In so doing, Mr. Warner follows the path of authors like Chris Buckley and Randall Silvis, but he is darker than the former and funnier than the latter. Regardless of the company he keeps, The Funny Man puts John Warner among the most perceptive and edgy chroniclers of an increasingly coarse American culture.