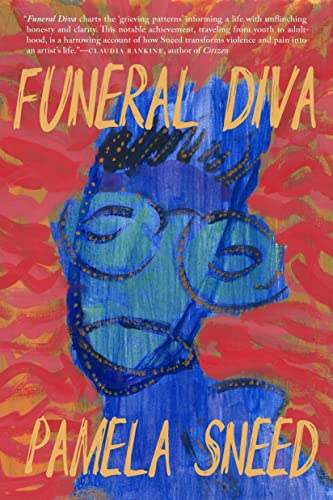 “Balancing and mixing, with rhyme and reason, love and anger, good and bad, memory and the created present, all to tell the story of a life, a memoir unrestrained, devoid of artificial forms. Honest. Free.”

Our books have broken free and it has nothing to do with the pandemic or with the changes brought on by the trend toward reading on digital devices. What has broken free in books is form, genre, feel. We have novels in verse and Young Adult books that take the protagonist from the womb to the casket as if to say the narrator never finished coming of age, or growing, and what a smart statement that is. We even have OpEd essay collections with the “essays” looking suspiciously like protest songs. It’s as if books had gotten together and decided to screw the establishment, be as individual as each person who creates them.

Pamela Sneed’s Funeral Diva is just such an emancipated book, a book freed from the tyrannies of genre and form. Composed of essays and poem and song, Funeral Diva tells a queer, black, coming of age story rooted in pop culture history, the word itself the title of the opening piece, appearing crossed out as if suggesting the author will be rewriting the existing one, thank you very much, or at least, that what has been told to black people about black people is never to be trusted.

“Every day, your role is perfected, having been punched, beaten, kicked in the chest, threatened, thrown downstairs. It’s happened so often it becomes a dance or a routine. As seniors, my parents adopted a wild little black cat. They named her Mysti but I’ve nicknamed her Bat Girl. She climbs up walls, shelves, breaking things, she tears the kitchen curtains going after a fly. She is also incredibly sweet and stays with me when I make art. When I’m at my parents’, most of the day is spent with them asking, ‘Where is Mysti?’ And we collectively search the rooms and under the beds to find her. I’ve nicknamed her Bat Girl because she was so wild as a baby that they kept her in her carrier with the door locked at night, and sometimes during the day, too. Most animals fear or dislike carriers but my mother’s cat returns to it, sleeps there now as an adult willingly because it’s where she finds comfort. She is unaware it’s a cage.”

A feeling explored in prose, the inevitability of the black cat’s confinement under the guise of care, may find its historical echo in a verse a few pages away. Say, in the poem “Uprising,” which starts with a picture of innocence robbed:

from the suburbs, Boston

I’d go into the city shopping

with my cousin and friends

There were hustlers there, I didn’t know then

with a set-up table.

They played some sort of game with shells

hid money under a shell or a plastic cup

made it purposely look so easy

fifty dollars, a lot of money for me then.

They made it look so easy.

You just had to pick the right one.

Of course, it was rigged

sick to my stomach

The piece continues traveling seamlessly, now leaping from the individual narrator to the collective conscience of many years later, and making the tie between momentsin time.

Wives with teased hair and lots of plastic surgery

on the white BET.

They made it all look so easy

But it is a story, a narrative, in the end, and as such, ends like this:

“Today, I started to cry as I wrote

knowing that in everything so far, I’ve tried to protect them

and realizing there are places in this world

even my maternal hands can’t reach.

In Poland, the Warsaw ghetto against a Nazi fascist regime

On Southern Plantations, in fields, in Haiti

On shores of Africa

We can see Sneed is unafraid of playing with time, the long ago past with the recent past and the present and the future imagined, sometimes all on the same page, the public and the private mashed up together. But what is special here is the care with which she does this: telling you these events that shaped the life of the one woman, herself, while also telling you about the life of the community that was raising her at the time, giving you the context of the cultural whirlwind around it all, without forgetting to color it in for you with words and smells and images from the moment, deeply remembered, so you can feel it and understand.

There’s one other thing about Funeral Diva, as special as the collage-like juxtaposition of narrative elements, vantage points, and shapes, and that is the delicious tension stretching taut throughout the whole book, flap to flap, between Sneed and the Black women in her world.

For example, the Black women she credits with making her who she is, through their work teaching her how to discover, shape and affirm her identity. Writers like Toni Morrison, June Jordan, and Ntozake Shange.

“At the time I wasn’t such a huge fan of June Jordan. I’m not sure if the reason I disliked her had to do with the fact she had tried to pick up my girlfriend Cheryl while visiting/lecturing at the New School or perhaps I wasn’t ready for her message. Knowing what I know now—if only I could go back through a time capsule and tell her how much it meant for me to hear her in person. Long after she would die of cancer and wrote the words in dialect ‘G’wan, G’wan!’ telling us a new generation to go on. Long before the collapse of the twin towers, before the massacre of so many gay men from AIDS, wars against brown bodies in Iraq, Harlem, and Afghanistan, before the growing epidemics of cancer, rape, police violence, domestic violence, mass incarceration, depression, demise of our pop stars, she said to a class at The New School in the true form of a prophet, speaking of the U.S.: ‘This country needs a revolution.’”

And this also applies to the women she is observing, holding accountable, arguing with even now about the messages their lives sent or send: Tina Turner, Beyoncé, others she carries a conversation with in her head (and on the page), or rather, a relationship, complete with regrets and a history of moments in which words were all there was and a young girl created herself according to the messages she found embedded into these women’s lives, and listened to as if created just for her.

Which makes the author’s relationship with the other important woman present throughout the book—her mother—even more complex and heartbreaking, all the odes and recriminations to women really just the identity and reaffirmation dance of a young, talented, queer Black girl desperately needing a mother after having had to mother herself into being.

“Say what you want about my mother/I know

her cruelty new no bounds

every year when school came/fall

I looked at the flyers of back-to-school clothes

As soon as I worked she made me pay rent

and that was the message engraved into me

instead of being taught responsibility

I was taught I owed

This poem is itself the irresolution of that relationship, even post death, and Sneed underlines that by titling simply, “Untitled,” and in it, juxtaposing neglect with forgiveness:

“She suffered from mental illness

Through stories I get glimpses

Say what you want but she is the greatest fighter

She is going now”

Balancing and mixing, with rhyme and reason, love and anger, good and bad, memory and the created present, all to tell the story of a life, a memoir unrestrained, devoid of artificial forms. Honest. Free.