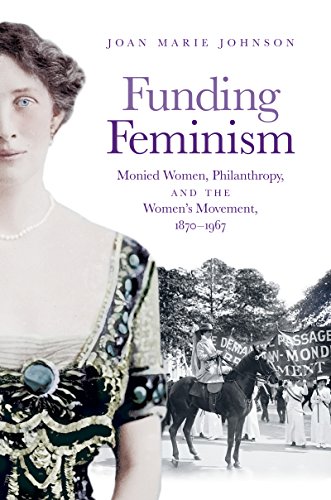 Through mini-biographies of women like Phoebe Hearst, Grace Dodge, Ava Belmont, and Katherine McCormick, coupled with well-researched events and attitudes of their day, Johnson brings together a group of women who collectively reveal what it was like to be rich and influential at the turn of the 19th century and well into the 20th.

All of them made their mark on the lives of American women, often not without sacrifice and struggle. Some were more powerful than others, some more political, but viewed as a group their contributions are to be recognized and applauded.

As Johnson points out in her introduction, the donations of monied fin d’siecle women strongly influenced “the trajectory of the women’s movement,” foreshadowing and helping to shape feminist endeavors leading up to suffrage, birth control, and autonomy.

“Progress was made possible in large part by wealthy women,” she argues. “Suffrage was won only when rich women gave large contributions . . . some coeducational institutions welcomed women only when ‘coerced’ into it by restricted giving; and access to birth control expanded only with money and legitimacy from society leaders.”

Two issues that Johnson explores, prevalent even today, are the political nature of feminist organizations and class divides that quickly become contentious. Some women, like Alva Belmont, were heavily into power, contributing their time and money first to one organization, then another, if their ideas about priorities or strategy differed from those of organizational leadership.

Coercive giving could become an issue when it meant deciding who would chair a board or what salaries would be paid. (It often was useful, too, as when a large amount of money was donated to a medical school on the condition that women be admitted.) Others wanted only to support white women, or antagonized working-class women by patronizing them and setting agendas for them without consulting the very beneficiaries of their financial contributions.

As Johnson puts it in her chapter about power and resentment in the suffrage movement, “Women, in particular, had to consider whether fighting against sexism implied a goal of equality across class (and race) as well as gender. The divide among wealthy, middle-class, and working-class women in the movement raised a question still under debate today, regarding whether feminism should be inherently democratic and nonhierarchical—and what happens when it is not.”

These kinds of issues cannot be dismissed in terms of the challenges they presented, but it’s clear that women’s philanthropy made a huge difference in women’s lives as donors grappled with, and overcame, many political and philosophical divides.

One hugely important initiative undertaken by Sophia Smith, founder of Smith College, and several other women to emerge in the late 19th and early 20th centuries, was the commitment to make higher education available to women. “Creating separate colleges for women ensured access for women to schools promoting rigorous standards of scholarship . . .” Johnson reminds us. Such colleges “promoted women’s independence through education and professional training.”

No longer were wealthy women giving money to men’s colleges to honor a male in their family. As historian Andrea Walton, whom Johnson quotes, put it, “the ways philanthropy enabled women to cross certain boundaries —to participate in the life of the university and to transcend or enlarge upon certain expectations of ‘womanhood’” cannot be understated.

The chapters on funding the birth control movement and funding research for the pill will be of particular interest to feminists active in the women’s health movement.

They feature Margaret Sanger and Katherine McCormick, among others, and take readers to times many will recall personally, such as when the pill became available in 1960. Sanger believed that only birth control could truly emancipate women, much as Susan B. Anthony had believed only the vote could. McCormack was single-minded in her quest for a birth control method controlled by women.

Some readers may have difficulty reconciling Johnson’s claim that testing the pill on Puerto Rican women was “not out of racist disregard for the safety of [them] in the trial but for practical purposes,” while she states that the nursing students who participated in the clinical trials in Puerto Rico “were not actually free to consent.”

Nor does she discuss the ethical dimensions of testing the pill there, which included the fact that the trial subjects who received placebo and became pregnant received no assistance, financial or otherwise, from the researchers. It was simply “the best choice [because] birth control was legal there, they personally knew a doctor who could oversee it, and it was close enough to bring specimens back to Massachusetts for testing.”

As Johnson rightly concludes in her epilogue, “Since the late 19th century, women have created enormous social changes in society. . . . Money has often been key to success [and] women of means continue to make a difference for women today through their giving.” Still she notes, “gender equality has not yet been achieved in the United States. . . . The need for women to give major gifts to fund changes benefitting all women is more imperative today than ever.”