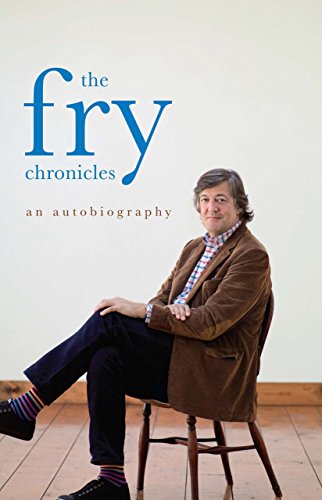 “Imagine a writer with a seemingly endless vocabulary who has somehow convinced himself that he is being paid by the word. Or try, if you can, to cope with an author who is writing in a stream of consciousness as wide and long as the mighty Mississippi and you have some idea of the experience of reading The Fry Chronicles.”

When the reader first hefts The Fry Chronicles by Stephen Fry, and on reading the jacket notes first discovers that the 400-page volume in hand is just that, the second volume of what—the 10 or 12 that the author intends to dedicate to recording the this-a and that-a errata that make up his glorious life—the reader experiences certain fears, the chief being that the experience of reading the book will be akin to being trapped in a corner at a cocktail party by the group blowhard and having to watch the ice cubes melt in one’s glass while feigning interest. Or worse, that one will be expected to go back and read the equally long first volume of the memoir before reading one in hand.

How, the reader asks himself on reading the first 50 pages or so, does one manage to write 400 pages and not have reached the end of what has been a long and eventful life (maybe 80 years—as much as Stephen Fry has to say about a lot of things, he never is much good for giving information on how old he is) and still have some pages to spare for favorite recipes and a good, lengthy bibliography?

Indeed, The Fry Chronicles manages in 400 pages to contain information on only about eight years of our author’s life—leaving us with the author still in his mid-twenties. Using the same formula of years lived to pages written, the reader cringes at the implications.

Not that the reader is not warned by the author when Mr. Fry writes:

“Why so many pages for so few years? It was a late adolescence and early manhood crowded with incident, that is one answer. Another is that in every particular I fail Strunk’s Elements of Style or any other manual of ‘good writing.’ If a thing can be said in ten words, I may be relied upon to take a hundred to say it. I ought to apologize for that. I ought to go back and ruthlessly prune, pare and extirpate excess growth, but I will not. I like words—strike that, I love words—and while I am fond of condensed and economical use of them in poetry, in song lyrics, in Twitter, in good journalism and smart advertising, I love the luxuriant profusion and mad scatter of them too. After all, as you will already have noticed, I am the kind of person who writes things like ‘I shall append a superscribed obelus, thus.’ If my manner of writing is a self-indulgence that has you grinding your teeth then I am sorry, but I am too old a dog to be taught to bark new tunes.”

Indeed, not since Anne Rice wrote the torturously long history of the Mayfair witches only to have her reader innocently turn a page to read the most terrifying words ever to spin out of her computer keyboard: To be continued, has there been such a long, lonely read.

But what of Stephen Fry himself?

He is something of a mystery to most Americans in that he is himself British, and not only British, but British of the sort who attended Cambridge (in his case) or Oxford and therefore is a highly educated Brit with fine manners and high tones. In the past, he teamed with Hugh Laurie for the BBC’s production of A Bit of Fry and Laurie, and spent a particularly notable season on British comic Rowan Atkinson’s Blackadder.

He is, however, perhaps best known here for his portrayal of playwright Oscar Wilde in Wilde back in 1997, or for his frequent appearances as a psychiatrist on the American crime drama “Bones,” or for the fact that it is indeed his voice you hear should you choose to listen to the audiobook of any book in the Harry Potter series.

None of this, of course, explains the years to pages written ratio, so let us return to the author’s own words on the subject:

“I hope you will forgive the unedifying sight of my struggle to express some of the truths of my inner self and to measure the distance between the mask of security, ease, confidence and assurance I wear (so easily that its features often lift into a smirk that looks like complacency and smugness) and the real condition of anxiety, self-doubt, self-disgust and fear in which much of my life then and now is lived. It is a life, I suppose, as interesting or as uninteresting as anyone else’s. It is mine and I can do what I like with it, both in the world in the real plane of fact and objects and on the page in the even more real plane of words and subjects.”

Which is perhaps his way of coming to the same conclusion as I.

That in working through The Fry Chronicles the reader comes to know two different Stephen Frys. The one in the “real world” and the one in the “even more real plane of words and subjects.” And that “the one on the page” seems to have invaded the brain of Stephen Fry like an earwig, crawling in deep somewhere in the occiput. And from there the words appear to our author in the night, ripe with anecdotes of Cambridge, prison (that bit is contained, disappointingly, in the first volume and is only mentioned in passing here), and Emma Thompson—all told in that roasted-chestnut voice of his and all of which get written down in the morning.

So here we have a case of an author who seems to be somehow stalking himself, or worse, stalking his reader with promises of future volumes to come.

Not since Carrie Fisher at last embraced her inner Princess Leia has there been so much narcissism left lying about in the sun.

The pity is that, taken at Twitter lengths, Mr. Fry seems a most jovial and thoughtful person. Allowed unlimited access to the keyboard, however, bad things begin to happen.

As noted above, Stephen Fry attended Cambridge University, and attending along with him were a number of notable people. By way of introducing one of them, he writes:

“She seemed, like Athene, to have arrived in the world fully armed. Her voice, her movement, her clarity, ease, poise, wit . . . well, you had to be there. One of the best things any performer on stage can do, whether stand-up comic, torch singer, ballet dancer, character actor or tragedian, is to relax and audience. To let them know that everything is going to be all right and that they can lean back in their seats happy in the knowledge that the evening won’t be a disaster. Of course, another of the best things a performer can do is provoke a feeling of excitement, danger, unpredictability and instability. To let the audience know that the evening might fail at any moment and that they need to lean forward in their seats and watch intently. If you can manage both at once then you are really something. This girl was really something. Medium height with a perfect English complexion, she was gravely beautiful, extraordinarily funny and commandingly assured beyond her years. Her name, the programme told me, was Emma Thompson.”

All of which—especially references to “Athene”—may seem a bit overwritten. But now imagine passages just as long—lots and lots of them—dedicated to persons unknown or to college theatrical productions or to various minutiae, cups and tea and whatnot. Or imagine lists, more and longer lists of minutiae, emotional traits, vagaries of stage life, and other folderol—lists that spin out and out and out like a pileup on the 405 in Los Angeles.

Imagine a writer with a seemingly endless vocabulary who has somehow convinced himself that he is being paid by the word. Or try if you can to cope with an author who is writing in a stream of consciousness as wide and long as the mighty Mississippi and you have some idea of the experience of reading The Fry Chronicles.

His work done, the reader gathers up his notes, only to notice that among the quotes for this book, one from The Daily Telegraph that refers to our author as “The Patron Saint of British intelligence.”

Is this a comment, the reader wonders, his brain now completely Fryed, on the author or on the state of national intelligence?