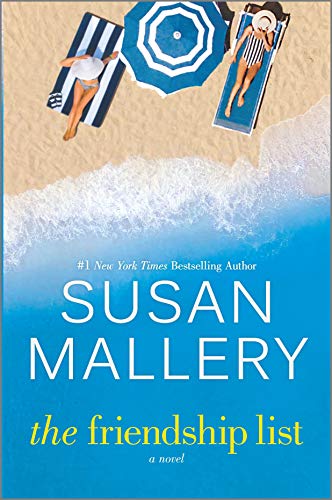 “The Friendship List is a sassy, sensuous tale about two women who discover their femininity for the first time. Along with the joys and heartaches that accompany this, they realize there is much more to life than working, raising kids, and settling for the mediocre.”

Ellen Fox is happy being a single mother to her 17-year-old son Cooper until she overhears him talking to his best friend about going away to college. Cooper feels responsible for his mom and doesn't want to leave her. He not only worries about her being alone, stating she has no life outside of him, but he's concerned about the price of his education.

At age 17, Ellen found herself pregnant when she had sex with her boyfriend for the first time. Determined to do the best for her child, she lived with her overly strict parents, abiding by their stringent rules until she finished attaining her teaching credentials and could find a place for her and Cooper. Now Cooper is ready to begin his senior year of high school and in all his formative years, Ellen has never dated or had a social life. Cooper recognizes this and is consumed by guilt for wanting to leave her to attend college.

Ellen is devastated upon hearing Coop's comments and automatically phones her best friend, Unity Leandre. More like sisters than friends, Ellen's folks took Unity in after her parents died when she was a teenager, and the two are extremely close.

Unity herself is in a rut, though she does not feel she is. She lost her husband Stuart, the love of her life, three years ago and has no desire for romance. Comfortable living in Stuart's childhood home, she is happy with her "handy lady" business, where most of her jobs are at the local senior development known as Silver Pines. She befriends several older residents there, joins a pickle-ball team, a grief support group, and believes her life is fine as it is. That is until a resident of the community kicks her off the pickleball team because she's too young and too accomplished, which makes it hard for the seniors to compete with her.

Unity arrives at her senior friend Dagmar's house, hoping to attain sympathy for being unwanted, but Dagmar tells her like it is:

"'What you have is an inability to move on with your life. Darling, I love you as much as if you were my own daughter but come on. What are you doing? pickleball with old people? The knitting club? Do you do anything with people you own age, ever?' She held up her hand. 'Excluding Ellen and Cooper?'

"Unity grabbed a slice of red pepper and took a bite.

Ellen and Unity decide they need to make adjustments in their lives. Ellen realizes she must show Cooper she has a life aside from him, for she wants him to go away to college and become independent.

Unity understands in her heart that she should move on, but she's comfortable with her life as it is, and she cannot face Stuart's passing.

Unity grabs a pad of paper and gives it to Ellen with the title "The Friendship List" written on the top.

When Ellen questions this, Unity says:

"'So, you need to convince Coop that you're totally fine on your own and I maybe need to get out of my rut.'

"Ellen wanted to tease that maybe wasn't the right word, but knew it was too soon. 'Okay. And?'

"'And we do it together. We make a pact to challenge each other to use the summer to make some changes. Cooper won't apply to colleges until the fall, so there's time for you to show him you have a life. Let's take advantage of that. We would each have a list of things to do and whoever does the most wins.'

"'Kind of. The winner treats the loser to a weekend at the Salish Lodge.'

"That caught Ellen's attention. She and Unity had been talking about a girlfriend's weekend at the Lodge forever."

Excited for a challenge, they post things they want to do on the list. Unity lists skydiving and challenges Ellen to get a tattoo. When Ellen says she'd like to have sex with a handsome guy, Unity states she needs to buy and wear clothes that fit her properly, for Ellen always wears things two sizes too large.

Unity's friend Dagmar sets her up with her nephew Thaddeus who happens to be a wealthy entrepreneur and breathtakingly attractive. But their first contact at dinner at Dagmar's is a disaster for Unity is plagued by anxiety and cannot even talk. She rushes off knowing she's made a fool of herself, yet Thaddeus sees something charming in her.

Meanwhile, Ellen goes out on a limb when she accompanies coach Keith Kinne, who is her colleague at the high school where they both teach, and who has been a dear friend for years. Keith has set up a three-week bus trip to take some students to check out various universities on the west coast. While in California, Ellen gets a tattoo and with Keith's daughter Lissa goes clothes shopping where she buys items that show off her feminine curves.

The Friendship List is a sassy, sensuous tale about two women who discover their femininity for the first time. Along with the joys and heartaches that accompany this, they realize there is much more to life than working, raising kids, and settling for the mediocre.