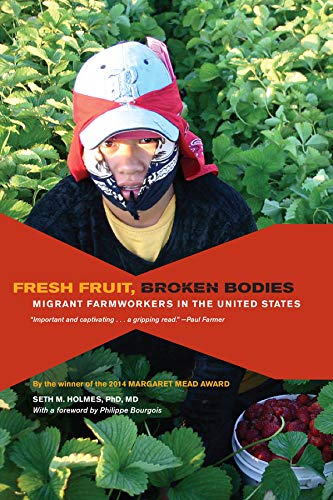 “. . . both a highly engaging read and a cry for more humane, healthy, and dignified living and working conditions for migrant laborers.”

Americans are becoming supersized—sedentary fast-food junkies and soda slurpers, dependent on processed products barely resembling natural foods. Doctors urge us to consume more fresh fruit. Yet paradoxically this more healthful food choice comes at a huge cost to the bodies of the migrant Mexicans who toil in American fields and orchards.

He details how these macro forces play out in the harsh working and living conditions they experience. “It is likely that the last hands to hold the blueberries, strawberries, peaches, asparagus, or lettuce before you pick them up in your local grocery store belong to Latin American migrant laborers.”

These workers have sacrificed their health for ours, but are largely invisible to consumers in the world’s richest economy.

Dr. Holmes fills this lacuna via a compelling ethnography of the lives, labor, and suffering of undocumented Triqui Indian farmworkers from the southern Mexican state of Oaxaca. He travelled the migrant circuit in the anthropological tradition of participant-observation.

In the process, he endured back-breaking berry picking alongside his informants; journeyed to their home village; lived in a decrepit labor camp shack; drove the interstate in caravan; lived homeless; squeezed into a squalid rental apartment; shared sorrows, joys, aches and pains; accompanied the sick to clinics; and was arrested in Arizona after a hazardous border crossing.

In addition, he interviewed clinic staff, public health officials, farm employees, U.S. border agents, and local residents. The outcome is an empathetic “thick description” which is both a highly engaging read and a cry for more humane, healthy, and dignified living and working conditions for migrant laborers.

The opening chapter is particularly gripping as Dr. Holmes shares a painfully honest account of his experience crossing the U.S. border with illegals. Sweaty apprehension is palpable among the migrants heading north from Oaxaca on an ancient bus.

In the bleak, staging town of Altar we learn the tricks of the trade: selecting a coyote (crossing guide), rubbing garlic cloves on your shoes to deter rattlesnakes, protecting yourself from the brutal desert sun with dark clothing, rationing water, and hiding money from prying eyes in little jars of mayonnaise. Then comes the mad dash across the border in the dark, over and under wires and walls, every shadow perhaps concealing an assailant, hiding under bushes from helicopters.

“Is it worth risking your life?” reads a hand-drawn poster in a Mexican church. “Do you really think your thesis is worth breaking federal law?” ask the U.S. border patrol agents who later arrest and fine Dr. Holmes $5,000 for “Entry Without Inspection,” reducing him to tears in the dehumanizing interrogation process. He straddles many borders as participant-observer, physician-anthropologist, American professional-Mexican migrant, and much of his work is explaining himself to “the other.”

The chapters on migrant life, labor and health on a vertically integrated family farm in Washington’s Skagit Valley show how a sub-marginal existence is justified as temporary or “better than what they are used to.” The farm is owned and run by third-generation Japanese-American brothers, who seem genuinely concerned about their workers. But owners are constrained by the need to compete globally, while language and cultural barriers inhibit informed empathy. Ethnicity, class and citizenship work together to construct entrenched fault lines of power, stratification, and segregation.

In the hierarchy of U.S. agricultural labor, indigenous Triqui and Mixtec contract workers rank lowest of the low, beneath the “regular” (Spanish-speaking) Mexicans. Racism is insidious, with bosses referring to the Triqui as dirty, stupid, burros, and perros (dogs). Cultural misunderstandings are rife, as most Triqui understand only a few words of English and speak minimal Spanish.

Cultural and experiential chasms warp perceptions of working conditions and related injuries. Unskilled labor is a total misnomer for strawberry picking—a highly skilled activity performed with both hands, while kneeling or squatting, exposed to pesticide residues.

Experienced workers pick at lightning speeds in order to make the required minimum. The farm owner claims that the Triqui do not “want” to take lunch breaks. But in fact many do not drink or eat anything before work as they can’t afford the time to use the portable toilets on the job.

Similar lack of empathy surrounds worker injuries. Some informants even assert that indigenous Oaxacans have a perfect physique for berry picking “because they’re lower to the ground” or that they feel less pain than regular Mexicans because they are “tough brutes” who “like to work bent over.” But Dr. Holmes testifies to the constant pain his informants endure along with other long-term health repercussions.

Migrant health clinics do little to alleviate suffering, because the dominant biobehavioral medical model relies on observable symptoms rather than context. Often, practitioners ignore the discontinuities in migrant life, traditional beliefs, and the specific demands of farm work, while much gets lost in translation such that patients tend to be blamed for their own afflictions.

The most egregious “treatments” include referring a sufferer from extreme headaches consequent on racial slurs and unfair treatment at work to therapy for substance abuse.

Another informant with violent stomach pains from strenuous field labor and torture by the Mexican military is diagnosed with an old boxing injury! A worker crippled while picking is returned to “light duty” doing the same job which caused the original injury. Unsurprisingly, the Triqui conclude that “doctors don’t know anything.”

By giving voice to silenced Mexican migrant laborers, Dr. Holmes exposes the links among suffering, the inequalities related to the structural violence of global trade which compel migration, and the symbolic violence of stereotypes and prejudices that normalize racism. In so doing, he underscores the importance of critically engaged public anthropology, challenges the medical profession to humanize and contextualize the biomedical gaze, identifies priorities in immigration and health care reform, and underscores the high costs to human bodies and to the planet of the cheap food available in the First World thanks to Third World labor.

We may never look at that bowl of picture perfect fruit on our table in quite the same way.