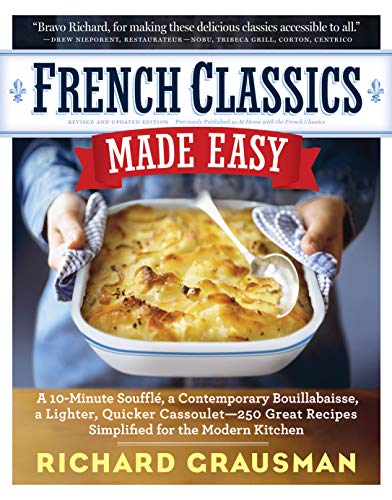 French cuisine, or at least the cooking of it, intimidates a lot of people. A perception of too many fussy techniques and hard-to-obtain ingredients stops people who might otherwise wield a wooden spoon with the enthusiasm of Julia Child. The great popularity of Italian food testifies to the desire of people to take simple ingredients and transform them into delicious food. Many cooks don’t see French cooking in that light.

In French Classics Made Easy, Richard Grausman aims to shatter those preconceived notions about French cuisine like the sugar crust on a crème brulée.

Mr. Grausman studied first with James Beard and later earned the Grand Diplôme from Le Cordon Bleu cooking school in Paris, as did Julia Child. Unlike Julia, he made friends with the director, “[the] strict, yet gentle and humorous Madame Elizabeth Brassart,” portrayed as an ogre in the film Julie & Julia. Brassart appointed Grausman as the school’s only representative ever.

Basically an updated version of At Home with the French Classics, French Classics Made Easy focuses on recipes and techniques easily accessible for home cooks. Most of the 250 recipes require ingredients found in any grocery store. Broken down into sections—First Courses, Main Courses, Vegetables & Other Accompaniments, Pastries & Desserts—the recipes in French Classics Made Easy include many all-time favorites, like the one that grand-mere proudly presented at Sunday feasts.

A good French bistro turns out dishes like these every day. With recipes for such appetizing fare as Cream of Asparagus Soup, Omelet with Herbs, Ham and Mushroom Crepes with Mornay Sauce, Poached Chicken with Creamy Tarragon Sauce, and sauces—the book is a veritable litany of the French bourgeois table.

Although Mr. Grausman’s Beef Burgundy recipe covers as many pages as does Julia Child’s, and as many calories, Mr. Grausman attempts to lighten and streamline recipes where possible. Reducing butter, cream, and egg yolks without affecting the flavor of the final dishes is no mean feat. Mr. Grausman achieves that with many recipes, mostly by cutting down on the amount of butter and cream, a seemingly insurmountable challenge in the dessert and pastry sections, which comprise almost one-fourth of the entire book. His recipe for Pots de Crème calls for five egg yolks and no cream, in contrast to the classic recipes loaded with a quart of heavy cream to twelve egg yolks!

French cuisine can be rigidly tradition-bound. But as Mr. Grausman says, “Most of the techniques used in preparing French classics are handed down from one generation of French chefs to the next by a strict apprentice system. . . . This system of learning may be one of the reasons that French cooking has remained distinctive through the ages and that many of the original techniques are still in use today.”

Where possible, as in the recipe for Sautéed Potatoes, for example, Mr. Grausman directs the cook to steam the vegetables in butter in a covered pan over low heat, eliminating the first step of parboiling the potatoes in another pan. In doing this, he actually utilizes a classic technique called “sweating,” generally applied to vegetables, although he doesn’t explain that relationship. Another surprising slip lies in the absence of an explanation for “mise-en-place,” or “everything in place,” the crucial French practice of preparing all ingredients ahead for recipes so as to increase accuracy and speed in cooking.

But in spite of these small omissions, French Classics Made Easy sparkles with the enticing tidbits of information readers have come to expect from Workman Publishing. Small, boxed sidebars provide illustrated insights into cooking techniques. Recipe headnotes often elaborate on the fascinating background of certain recipes.

At the end of many of recipes, Mr. Grausman offers numerous variations, as in the case of the master recipe for Green Beans. There the reader learns that freshness rather than size accounts for variations in cooking times, as well as six alternative methods for preparing and serving green beans.

This highly usable book ends with two appendices, one dealing with the mysteries of the metric system and the other with adjustments for high-altitude cooking.

First of all, French cooking can be enjoyable and as easy as any other type of cooking.

And the third thing? Mr. Grausman’s food tastes delicious, too.

So pull out that wooden spoon and get started.