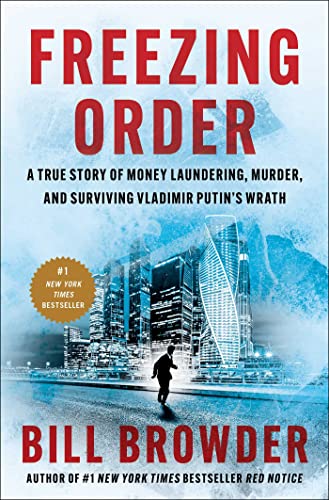 “Advocacy for the Magnitsky Act, which would freeze Russian assets abroad, made the author a target for Putin. Not surprisingly, since the Act, itself, put Putin in its own crosshairs.”

A follow-up to Browder’s Red Notice, the book starts in the middle of the story with Browder’s arrest in Madrid based on a bogus Russian Interpol arrest warrant. From there, the author flashes back to explain the how and why of the warrant and arrest, then moves forward to detail the incredible saga of Russian president Vladimir Putin’s vendetta against him that placed him in both legal and personal jeopardy. Jeopardy that persists to this day.

In 1996, Browder had set up a hedge fund in Moscow called the Hermitage Fund to invest in Russian companies. Almost immediately, Russian oligarchs and corrupt government officials “robbed blind” the companies Hermitage invested in. Instead of accepting this as simply the cost of doing business, Browder fought back. In retaliation, Putin expelled him from Russia as a national security threat, and officers from the Russian Interior Ministry essentially stole the fund’s holding companies.

They also brought criminal charges against one of Browder’s Russian colleagues, whom Browder hired a team of Russian lawyers to defend. One of the lawyers, Sergei Magnitsky, discovered the theft by oligarchs of a $230 million tax refund owed to those companies, though the money was then being hidden as part of an elaborate money laundering scheme.

Not to be outdone, Russian officials tried to frame Browder and his fund for the theft, and targeted Browder’s Russian lawyers. Two of the lawyers fled the country, but Magnitsky stayed behind. He believed that “Russia was changing for the better and that the rule of law would ultimately protect him.”

He was wrong. Russian authorities arrested, imprisoned, and tortured him. They ultimately “put him in an isolation cell, chained him to a bed, and eight riot guards with rubber batons beat Sergei until he was dead.”

Browder resolved to bring to justice those responsible for the death. The heart of the book follows his efforts, and those of others, to advocate for the passage of a law not only in the United States, but also in Europe, that would “ban visas and freeze assets of Russian human rights violators, including those who had tortured and killed Sergei.”

And they had a name for the law: Magnitsky Act. If the name rings a bell, it may be because of a meeting that took place in Trump Tower in the summer of 2016, at the height of the presidential campaign, to discuss the Act and “adoptions.” More about that later.

Advocacy for the Magnitsky Act, which would freeze Russian assets abroad, made the author a target for Putin. Not surprisingly, since the Act, itself, put Putin in its own crosshairs. After all, “the [Putin] regime valued money more than human life, and . . . every corrupt Russian bureaucrat kept their money outside of Russia.”

Former FBI agent Clint Watts once told the Senate Intelligence Committee, in testifying about Russians covering their tracks on 2016 election meddling, “Follow the trail of dead Russians.” He could just as easily have been talking about the money laundering that the Act was intended to combat. Besides Magnitsky, others were either killed or nearly killed, through such means as beatings, poisonings, gunshots, and even by being pushed off buildings. The author lays all of this at the doorstep of Putin, who made repealing the Act his “top foreign policy objective.”

As a different, ostensibly more civilized, tactic against Browder, Russia convicted him in absentia for alleged financial crimes, which they later tried to use as a bargaining chip. When special counsel Robert Mueller, investigating Russian meddling in the 2016 election, indicted 12 Russian GRU officers, also in absentia, Putin put Browder on the negotiating table.

At the Trump-Putin summit in Helsinki in the summer of 2018, as the two presidents stood side by side before the international press, Putin suggested, publicly, that he might consider extraditing those 12 GRU officers to the U.S. if there was reciprocation. He said, “For instance, we can bring up Mr. Browder in this particular case.” To which, to Browder’s amazement and consternation, Trump responded, “I think that’s an incredible offer.”

Browder then had to determine whether it was safe for him even to be in the United States. “My original nebulous concern that some Russian assassin might try to kill me had now been overtaken by the very real fear that the President of the United States would hand me over to the Russians.”

So what was it about the Act that aroused Putin’s ire? Noting that the Act would subject Russian human rights violators to having their assets frozen, the author writes, “The Magnitsky Act put all of [Putin’s] wealth and power at risk. That made him a very angry man. His crusade against the Magnitsky Act wasn’t just philosophical, it was personal.”

In retaliation for passage of the Act, Putin banned American families from adopting Russian orphans. And that brings us back to that meeting at Trump Tower in the summer of 2016 to discuss adoptions, “an innocuous-sounding code for the Magnitsky Act.”

Among the attendees at the meeting were Trump campaign manager Paul Manafort, son Donald Trump Jr., son-in-law Jared Kushner, and several Russians, including “Kremlin operative” Natalia Veselnitskaya, a very high-powered Russian attorney. Browder found it to be “unbelievable . . . that the Russian government, through Veselnitskaya, had been able to get an audience with the son of the next president of the United States.”

Browder continues, “I had no idea what she’d offered in return. But what I could say for certain was that she was part of a sophisticated Russian intelligence operation, and that, with such a big risk, they wouldn’t have sent her to Trump Tower empty-handed.”

On a particularly chilling note personally for the author, when the FBI later obtained Manafort’s notes of the meeting, they reflected that the first thing he had written was “Bill Browder.”

Freezing Order takes the reader on a thrilling dual track of following the progress of a money laundering case while keeping abreast of efforts to secure passage of the Act, while the author also fights for his own freedom and survival. The book’s point of view is less than objective—not surprising since it is the author’s personal account of his involvement—but the detail with which Browder tells the story, and the evidentiary support he provides, lend it credibility.

The reader may not agree with Browder’s opinions and conclusions, particularly as relates to the 2016 presidential election but, to cite a Texas expression, he certainly has a dog in the fight. And his story of that fight is worth reading.