Freedom from Violence and Lies: Anton Chekhov’s Life and Writings 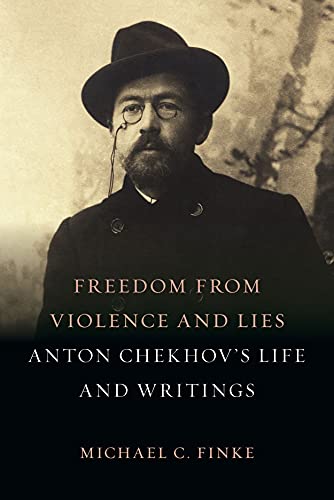 “a workmanlike portrait of Chekhov, useful for the general reader curious to learn more about this master of Russian literature . . .”

Anton Chekhov (1860–1904) was an unusual transition figure—bridging medicine and literature, classical and modern drama, European and Slavic temperaments, and an earthshaking transition in Russian society, the collapse of its feudal system of serfdom, and the arrival of industrialization. As the son and grandson of former serfs, as a man who achieved eminence as both a doctor and writer, as the playwright whose works brought fame to Konstantin Stanislavsky and the Moscow Art Theatre, and as the friend of eminent Russian men of letters including Leo Tolstoy and Maxim Gorky, Chekhov was a major cultural figure of his time whose contributions to Russian society included many acts of philanthropy.

At the outset of his biography, Finke tells his readers what to expect. “This brief account of his life will dwell on key points in his literary career and offer analysis of select, representative works so as to flesh out the most distinctive features of his writing and to model approaches that will pay off in tackling others of his texts.” General readers may not be looking forward to “tackling” Chekhov’s texts, and scholars may be more interested in arguing with Finke than following his model, so from the outset it’s not clear who this book has been written for. But there is much to learn from it.

Chekhov was born in Taganrog, a provincial port city on the Sea of Azov whose shipping industry had given it a cosmopolitan population that included a large Greek community. His parents were members of the merchant class. Father Pavel owned a general store, but was  a poor businessman, a trait that Chekhov inherited. Chekhov had two older brothers, Alexander and Nikolai, two younger brothers, Ivan and Mikhail, and a younger sister, Maria. Pavel was a tyrannical, sanctimonious parent who beat his children for their transgressions against his standards, prompting Chekhov to later declare, “In my childhood, there was no childhood,” a remark that exposes the deep vein of irony running through his work and his life.

Chekhov was a poor student, and in his father’s eyes seemed destined for a trade as a tailor or a cobbler. But when Chekhov was 13, Pavel went bankrupt and fled to Moscow to avoid debtors’ prison, taking all of his family except Anton with him. Anton remained in Taganrog and earned money as a tutor, a role that hinted at his brilliance. He sent the bulk of his earnings to Moscow to help support his family, an early sign of his philanthropic bent. At this time, he also began writing poetry, plays, and short comedic sketches.

When he was 19 he moved to Moscow to live with his family. He attended Moscow University on a scholarship provided by the city of Taganrog and, at his parents urging, studied medicine. He also began publishing short humorous pieces in small presses that learned of his work through the intercession of his older brothers, who had gained footholds in the cultural life of Moscow. The money that Chekhov earned from the sale of his writing became his family’s principal means of support, a dependency that continued after he passed his medical exams and began practicing as a doctor. He treated primarily family, friends, and the indigent, rarely charging for his services. His sense of compassion for the suffering made him an inept businessman who was vulnerable to exploitation.

Though Chekhov is remembered primarily as the author of four important plays—The Seagull, Uncle Vanya, Three Sisters, and The Cherry Orchard—that continue to this day to be produced on stages around the world (Finke points out that Chekhov is second only to Shakespeare in stagings in American theater, surpassing Tennessee Williams, Arthur Miller, and Eugene O’Neill), his major output was short stories. He wrote hundreds of them for publication in leading Russian periodicals of the day, whose wealthy publishers, from all points on the political spectrum, became his patrons.

His work presented small dramas of everyday Russian life with the ironic detachment of a clinical observer. As a doctor regards his patients objectively, studying their symptoms in the search for underlying causes that will respond to treatment, so Chekhov the author observed his characters as human beings whose behavior was the result of and the key to their inner psychological states. Much of the humor, pathos, and irony that Chekhov’s works stir up in his readers and audiences derives from his skill in depicting human frailty and dysfunction with both compassion and honesty.

Chekhov died from tuberculosis when he was 44, and the symptoms of this illness began to appear when he was 24. As a doctor, he knew what the illness meant for his life expectancy, but he downplayed its significance, determined to plunge into life rather than seek to prolong it by curbing his activities and living as an exile in a more moderate climate. This tension between wanting to live fully while realizing that death was close by may account for the profound sense of irony that underlies his writing, particularly his major plays, whose characters all must contend with failure, frustration, and disappointment.

Chekhov came late to the theater. One of his patrons, the conservative Alexei Suvorin who for years had been publishing Chekhov’s short stories in New Times, urged him to write a play for his private theatre in St. Petersburg. Chekhov wrote The Seagull, but submitted it instead to the Alexandrinsky Theatre, Russia’s National Drama Theatre. The play opened there in October 1897 but was met with derision by the audience. Chekhov left St. Petersburg vowing never to write again for the theater, but his attitude changed when Konstantin Stanislavsky directed the play for the newly formed Moscow Art Theatre he had founded with the playwright Vladimir Nemirovich-Danchenko. The production was well-received by both audiences and critics, leading the theater to request more work from Chekhov. The result was Uncle Vanya (1899), Three Sisters (1901), and The Cherry Orchard (1904).

Chekhov’s romantic life was scattered among a number of short-lived affairs, often with married women. His association with the Moscow Art Theatre led to his only marriage, to Olga Knipper, the theatre’s leading lady. They were secretly married in Moscow in 1901, and honeymooned at a spa where Chekhov sought treatment for his rotting lungs. Three years later he would die at another spa in Germany, with Olga at his bedside. Her only pregnancy ended with a miscarriage, a final irony.

This biography is another entry in Reaktion Books’ Critical Lives series. It is intentionally abbreviated, and focuses primarily on Chekhov’s literary output, though his personal life is fleshed out with details about his extensive philanthropic activities, his social activism, and his family relationships, which were complicated and found their way into his stories and his plays. Finke thoughtfully points out these resonances. The plays all deal with family dynamics set against broader issues in Russian society, especially the decline of the landed gentry and the weakness of its intelligentsia.

Though Finke writes clearly and offers intelligent analysis of Chekhov’s stories and plays, the account can feel at times a bit plodding, as the author dutifully follows the chronology of events and then travels down side paths to interpret Chekhov’s oeuvre. It’s a workmanlike portrait of Chekhov, useful for the general reader curious to learn more about this master of Russian literature, but not inspiring.