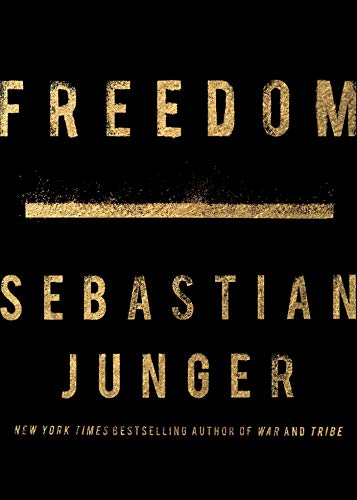 Freedom is an account of Sebastian Junger’s 400-mile walk through the back country of eastern and central Pennsylvania along a rail line right of way that passes through the Susquehanna Valley and the hollowed-out rust belt towns in its path.

Junger made the walk in intervals with a total of eight companions who joined him for different sections of the trek. The narrative spine of the book is Junger’s progress along the route, in whose course he gives us richly detailed descriptions of landscape, camp sites, railroad infrastructure, and rumbling freight trains that carry menace as well as cargo.

This through-line, like the railway it follows, often splits off into side spurs of local history, tales of life from Pennsylvania’s frontier days, and speculations on the meaning of freedom. It’s a short book—147 pages divided into three sections—but it packs a wallop with its vivid scenes of the tramping life interspersed with detours into human history.

Junger calls his ramble “The Last Patrol,” suggesting its likeness to a military operation. In warfare, patrols often penetrate behind enemy lines for reconnaissance. Junger and his companions, some of whom are veterans of wars in Iraq and Afghanistan, are in enemy territory because they are trespassing on railroad property throughout their journey. They are, in a sense, fugitives who must go out of their way to avoid detection, though occasionally they walk into a town to buy provisions or eat a meal in a diner.

His self-imposed outlier status brings Junger to the question of freedom, which he takes to be a condition of life in which one is not subject to the will of another, be it another individual, an institution, or  a state. This conception of freedom as personal autonomy, as independence, Junger illustrates with stories of nomadic peoples, hunter-gatherer societies in which all are equally poor and therefore equally free, and raiding tribes like the Apache, who owned little, had extreme mobility, and lived by plundering others. This of course makes the Apache dependent, just as criminals, who operate outside the boundaries of the law and are therefore “free,” depend, like parasites, on their victims for survival.

Junger brings in other examples of freedom seekers—insurgents like the Taliban in Afghanistan who have successfully resisted domination by two mega-states, Soviet Russia and the United States, the fighters for Irish independence from Great Britain, and our own country’s revolutionary founders. The freedom that Junger writes about is a social and political freedom that is the hallmark of a democracy. Tellingly, he remarks at one point, “Accepting an election loss may be the ultimate demonstration of how free you want to be.”

Of psychological freedom, the kind of inner freedom that religious mystics pursue in their quest for union with the divine, or that artists experience when immersed in their craft, or that athletes often experience when mind and body fuse—Junger has nothing to say. It’s not a dimension of freedom that seems to interest him, though for some seekers it is the highest form of freedom because it allows you to be free even if you are in prison. Freedom from the ego and its endless needs and attachments may well be the greatest liberation—and the hardest won.

Junger writes in a blunt, tough, manly style that conjures Hemingway. Here we are in camp for the night: “The fire embers still pulsed, and the night air was soft and benevolent, and it felt like summer waited for us a few days upriver. My dog lay on my ankles, and the three other men shifted and muttered in their sleep. There may be better things than that, but not many.”

This is a book for men who are drawn to an outdoor experience that is difficult, occasionally dangerous, and existentially pointless. Junger acknowledges that his trek is largely a gesture, perhaps merely a stunt. “The towns, the cops, the freight companies—no one wanted us on the lines, which is understandable. In fact, over the course of four hundred miles, we failed to come up with a single moral or legal justification for what we were doing, other than the dilute principle that we weren’t causing any actual harm so we should be able to keep doing it.” Sisyphus might have said the same thing about pushing his boulder up the hill. Even though it was absurd, he kept at it. Maybe there’s no better definition of freedom than that: choosing the fate that has been given without your consent.