The Free World: Art and Thought in the Cold War 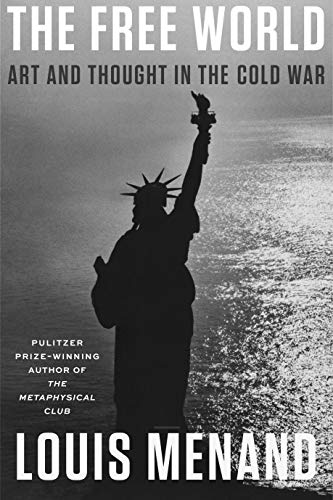 “In these pages, ideas and creativity still matter, making this welcome book a cause for celebration.”

The years 1945–65 were a time of “rapid and exciting” cultural change. They are also the period in which author Louis Menand (b. 1952) first saw the light of day. What better reasons for a Harvard English professor to write an enthralling doorstop of a book called The Free World: Art and Thought in the Cold War?

Make no mistake: This extraordinary book—a great pleasure to read—warrants every fine review it has received. It will win prizes. In Menand’s company, the reader visits (or revisits) the emblematic figures of an increasingly international artistic and intellectual community. Few will read this history and not see these artists, writers, and others in a new light.

Drawing on wide reading and much research, the author helps us view these figures and their work in often unexpected ways: Elvis Presley never intended to be a rock singer. Neal Cassady, who influenced Jack Kerouac, was “an uncanny cross between W. C. Fields and James Dean,” with “a kind of sociosexual ADD.” The idea of a “Pollock painting” includes Pollock painting. Orwell, first to use the term “Cold War,” felt guilty for being part of the “white imperialist bourgeoisie” and wanted to be classless.

Sometimes Menand traces connections: Lionel Trilling’s English class at Columbia was a hub, where Ginsberg met Lucien Carr, who introduced the poet to “gentleman bomb-thrower” William Burroughs; at other times the author examines everything from the “counterintuitive” creative works of Cage, Cunningham, and Rauschenberg, to how the Beatles “tried something out, and then they tried to figure out why it worked.”

A writer for The New Yorker, Menand is always on the alert for absorbing back stories. He details the collaboration between art critic Clement Greenberg and writer Dwight Macdonald that resulted in “Avante-Garde and Kitsch,” one of the “best-known essays” of postwar intellectual life.

Writing with the same lucidity and authority, he corrects myths surrounding the rise of rock ’n’ roll, including the often-told origin story that disc jockey Alan Freed was astonished to see white teenagers buying rhythm and blues records in a Cleveland recording shop. In fact, says Menand, Freed was taken to the shop by its owner, Leo Mintz, who encouraged the disc jockey to launch an R&B radio show to drive more business to the store. “To that end, Mintz offered to pay the show’s expenses, including Freed’s salary. Freed did not see many, or possibly any, white teenagers buying records there that night.”

Menand tells us that Susan Sontag made every other American critic of the period look “provincial.” She was “attacked—sneered at, really—by writers like Irving Howe for critical permissiveness and the abandonment of standards. This was a misreading. Sontag wasn’t merely an elitist. She was a snob. She was the kind of person who does not own a television. Her standards were highbrow standards. She just wanted to be on the cutting edge of cultural awareness.”

“Obsessive” in her intellectual passions and her humorlessness, the young Sontag entered Berkeley at 15 and took refuge in reading.

The chronological thread holding Menand’s portraits together begins with patrician diplomat George Kennan’s shaping of America’s Cold War policies and ends during the Vietnam War. Along the way, he tells the stories of many movements and phenomena, including the inception of paperback publishing (a distribution revolution, really), structuralism, the Beats (not rebels, but “misfits”), “Action” painting, deconstruction, the New Criticism, and the rise of youth culture.

Throughout, he writes in highly accessible prose, as if discovering a person or topic for the first time (hardly the case). He is brilliant, and likeable, exhibiting passion for artists and ideas. There is excitement in his writing. And it helps bring the reader deep into subjects that never seemed all that interesting. You don’t have to like the music of the Zen-influenced composer John Cage to become fascinated by his life and work as related here.

The Free World is exhaustive and, in truth, sometimes exhausting. Not because it is so long, or dull, but rather because the author’s nonstop insights and story telling can be overwhelming. The book is best read in sections, to be savored.

Early on, Menand declares that the period in question was one in which
“people cared. Ideas mattered. Painting mattered. Movies mattered. Poetry mattered.” In these pages, ideas and creativity still matter, making this welcome book a cause for celebration.