Freaking Out: A Decade of Living with Terrorism 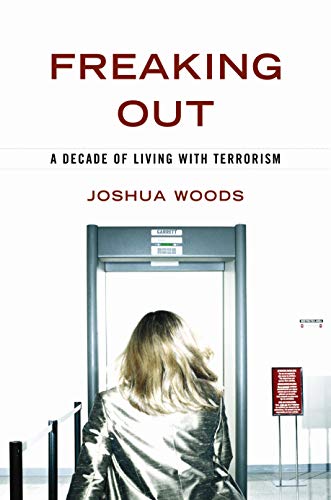 “The prevailing theme of Freaking Out is that any terrorist threat is overstated and any entity that discusses a terrorist threat has some dark ulterior motive to steer the public toward violent action. . . . Perhaps Mr. Woods should stop calling his defenders terrorists and just say ‘thank you.’”

Freaking Out. This eye-catching title promises a new and interesting perspective on the decade following 9/11. Unfortunately, Joshua Woods offers the reader neither a new perspective nor an interesting one.

Mr. Woods’ political rhetoric simply beats the tired old Bush-bashing drum beaten by so many liberal writers before him, and his scientific analysis is characterized by wordy restatements of the obvious.

In Freaking Out, Mr. Woods attempts to analyze the effects that the 9/11 strikes and the threat of terrorism have had on both U.S. and global society over the last ten years.

He draws much of his analysis from his and other researchers’ studies of press articles as well as statements by societal leaders. Additionally, Mr. Woods conducted an experiment using subjects from a university campus. Unfortunately, he allows his own left-wing political bias to affect his results, in some cases to the point of absurdity.

Outside the boundaries of analysis, Mr. Woods’ political bias becomes even more apparent. With inflammatory prose he ridicules the FBI, equates U.S. forces with terrorists, and calls an American missile a “suicide bomber.” This rhetoric never slackens—right down to the final pages in which he offers a misguided description of an Air Force Remote Vehicle pilot, demonstrating both his ignorance and his disdain for U.S. military operations.

Even when the leftward leaning that leaves his conclusions entirely off balance is put aside, Mr. Woods’s studies and experiments still fall short of useful science. His results serve only as lengthy explications of the patently obvious.

Few readers will be surprised to learn that a large-scale terrorist attack against a national symbol increases patriotism and galvanizes the collective response, or that the resultant patriotic attitudes last longer than changes in actual civic-minded behavior. Even fewer will be surprised to learn that in the months following the attack, articles in German newspapers were more likely to favor U.S. opinion than articles in Egyptian newspapers—although the conclusion that Mr. Woods draws from this result is again absurd: that this somehow makes the Egyptian media more “free.”

The prevailing theme of Freaking Out is that any terrorist threat is overstated and any entity that discusses a terrorist threat has some dark ulterior motive to steer the public toward violent action.

Mr. Woods finds it easier to believe that America has not experienced a large-scale post 9/11 attack because there is very little threat, rather than realize that a legion of men and women in a multinational corps of military and intelligence agencies have worked tirelessly over the last decade to disrupt and interdict terrorist operations to prevent just such an attack. Perhaps Mr. Woods should stop calling his defenders terrorists and just say “thank you.”