Frank Frazetta's Adventures of the Snowman 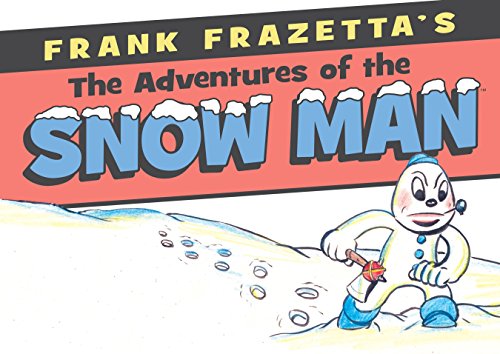 “Talent is always a joy to witness. But young talent like this is a very special joy.”

This is going to be a short review. But then The Adventures of the Snow Man by Frank Frazetta is a short book. And an odd one at that.

Frazetta is probably the most widely known—and revered—illustrator of science fiction and fantasy subjects, having gained much fame and a large following for his paperback book covers, putting the image into the imaginative worlds of Tarzan, John Carter of Mars, and Conan the Barbarian, among others. Several generations of young minds looking for escape into fantastic realms of adventure where landscapes were often dark and danger-filled, men were perfect specimens of well-muscled heroes, and women were beyond beautiful as their “attributes” were beyond belief, will never regret having made the trip. But earlier in his career Frazetta worked in comics and comic books, even ghosting for Al Capp on his Lil’ Abner strip.

And at the age of 12 1/2, stuck in his bedroom on a snowy day, and inspired by a snowman in his backyard being battered by a winter wind, Frazetta created the Snow Man. This wasn’t a gentle character associated with winter wonderlands and Christmas, but rather a righteous fighter against the evil Axis, which America and its allies were fighting in the Second World War. A few years later, at the still young age of 15, Frazetta created at least two Snow Man comic stories, one of which was published in Tally-Ho Comics, and the other that makes up this current book.

The Snow Man, who smokes a strange looking pipe and whose only weapon is an axe, seems to operate “Somewhere in the Rockies,” most likely in Canada as the local authorities are red-suited Mounties. This snow-covered remote area seems to be a good hiding place for such Axis terrors as “The Skull,” a strange, vulture-like creature of—of course—pure evil, and various Japanese agents of very ugly demeanors. What damage they can do to America in the remote Canadian Rockies is not made clear.

But whatever it is, the Snow Man is there to stop them. Despite being a snow man (ostensibly a man made of snow) our hero can be hurt and can bleed—nice, red, American blood we assume, despite the Canadian locale. If he is a “super” hero of any sort, his superpower seems to be pure pugnaciousness. He’s like Popeye with a body temperature of 32⁰ F.

It is all grand, silly stuff from the mind of a 15-year-old boy with a world at war around him.

But the literary quality of the story of The Adventures of the Snow Man is probably not why Dark Horse Books and Frank Frazetta, Jr (Frazetta senior died in 2010) decided to publish this book. It may not even have been just to preserve a bit of history in regard to a well-loved artist, although its publication certainly does that. One hopes that the motivation was to show exactly what a wonderful artist Frazetta was even at what is normally a formative age. The boy may have been fifteen, but the artist was fully mature.

Just the design and drawings of the Snow Man himself tells you that. Frazetta’s control of line was free-flowing and elegant, defining the form within precisely, giving it full dimension as a corporeal entity. And his posing of the character in each drawing is always alive with movement—the movement just before each static pose, and the movement directly after them. Every rendering of the Snow Man is a delight.

Frazetta fans will want The Adventures of the Snow Man for their collection. Fans of comic art may well want it as well. Talent is always a joy to witness. But young talent like this is a very special joy.