Frank: A Life in Politics from the Great Society to Same-Sex Marriage 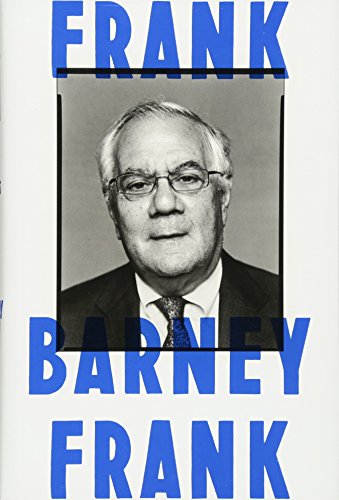 Barney Frank came to Washington with Ronald Reagan in 1980. There ends any similarity between them.

For 32 years, Barney Frank represented his Massachusetts constituents in the U.S. House of Representatives. He was a liberal but pragmatic voice in an increasingly partisan national legislature. He was also, after much hesitation, an openly gay man serving at a time when the campaign for inclusive LGBT rights was just beginning to hit its stride.

Frank’s new autobiography is an insider’s take on the major political issues of the past 30 years. It also is the story of how he came to grips with his sexual orientation and the realization that being gay would not short circuit his political career.

Barney Frank was around Capitol Hill long enough to watch the process move from collegiality to unabashed partisanship where Congress operated under a “just say no” drumbeat.

Germany’s first Chancellor, Otto von Bismarck, is credited with saying, “Laws are like sausages, it is better not to see them being made.” Barney Frank’s autobiography is an example of the truth of that statement.

Frank spends considerable time talking about his early political career and how he made decisions that ultimately led him to Washington. Fledgling politicians are advised to read and learn. They could learn a much from how Barney Frank went from a 16-year-old campaign volunteer to a respected member of Congress.

While the early years of his career are interesting, the book is at its best when Frank relates the machinations, negotiations and horse-trading that occurred during the financial crisis of 2007–2008. This is the good stuff.

Perhaps it is the impact of that financial debacle that makes this behind-the-scenes look so interesting. And Frank’s description of what happened is coherent and easy to follow.

In the midst of telling the story, Frank quotes from others who were there but whose recollections vary in significant part from the historical record.

Former Vice President Dick Cheney’s memoir, for example, is one example. Cheney claims that in 2003 Frank, as Chair of the House Banking Committee, blocked legislation to reform financial institutions and strengthened government regulations. Unfortunately, for Mr. Cheney the Republicans controlled the House of Representatives in 2003. And it is highly unlikely the GOP would have appointed a liberal Democrat to chair any committee. Talk about a major oops!

Frank refers to many misrepresentations made by various commentators and observes, “. . . we can see how ideological necessity becomes the mother of historical invention.”

The book includes details of how Republicans refused to cooperate in dealing with the financial crisis—even though a president from their party needed their help.

Frank writes about how his years of experience and knowledge of Congressional procedure allowed him to marshal the forces (and votes) needed to avoid a total financial meltdown.

Readers need not be financial wizards or Wall Street experts to understand Frank’s comments and the proffered solutions. And von Bismarck was right, it is sausage and it ain’t pretty.

At times, the book can be difficult to follow. Frank’s editor should have suggested the author do a better job of keeping on topic because Frank’s habit of going off on tangents are confusing and annoying. Chapter titles reflect the initial topic but Frank often digresses into other issues that wend their way through the narrative.

Even with these shortcomings, Frank is an interesting and engaging read. Barney Frank was a participant in some of the most compelling political and social dramas occurring at the end of one century and the beginning of another. He is smart, politically savvy and not averse to acknowledging mistakes and missteps--his own and those of others.

Taken as a whole, Frank provides an engaging sneak behind the curtain that shrouds Washington, DC, and Capitol Hill. This book will be a page-turner for political junkies and anyone else who wants to know how sausages . . . that is, laws . . . are made.