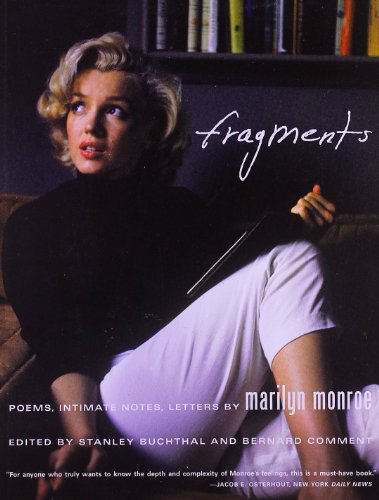 Of Marilyn Monroe, Karen Blixen, who achieved fame under the pen name of Isak Dinesen, wrote, “I think Marilyn is bound to make an almost overwhelming impression on the people who meet her for the first time. It is not that she is pretty, but she radiates, at the same time, unbounded vitality and a kind of unbelievable innocence. I have met the same in a lion-cub, which my native servants in Africa brought me. I would not keep her, since I felt that it would be in some way wrong. . . . I shall never forget the most overpowering feeling of unconquerable strength and sweetness she conveyed. I had all the wild nature of Africa amicably gazing at me with mighty playfulness.”

Of her image, photographer Cecil Beaton insightfully wrote, “She has rocketed from obscurity to become our post-war sex symbol, the pin-up girl of an age. And whatever press agentry or manufactured illusion may have lit the fuse, it is her own weird genius that has sustained her flight. Transfigured by the garish marvel of Technicolor cinemascope, she walks like an undulating basilisk, scorching everything in her path but the rosemary bushes.”

Of her character, poet Carl Sandburg wrote, “She was not the usual movie idol. There was something democratic about her. She was the type who would join in and wash up the supper dishes even if you didn’t ask her.”

About her habits, the editors of Fragments, Stanley Buchthal and Bernard Comment, write, “Contrary to the image we may have of Marilyn as often disorderly and chaotic, she attended to some aspects of daily life with care and even meticulousness. When she had to decorate an apartment or house, she made notes, took measurements, collected samples or patterns, and decided on the color schemes and the arrangement of furniture. . . .”

Such are the fragments that make up Fragments. Not all poems, by any means, nor intimate notes or letters, but, as the title promises, just bits and pieces, moments frozen on the back of an envelope or scrawled in a red notebook.

Here’s another. In his eulogy of her, Lee Strasberg said, “Marilyn Monroe was a legend. In her own lifetime she created a myth of what a poor girl from a deprived background could attain. . . . But I have not words to describe the myth and legend. I did not know this Marilyn Monroe. We, gathered here today, knew only Marilyn—a warm human being, impulsive and shy, sensitive and in fear of rejection, yet ever avid for life and reaching out for fulfillment. I will not insult the privacy of your memory of her—a privacy she sought and treasured—by trying to describe her whom you knew to you who know her. In our memories of her she remains alive, not only a shadow on a screen or a glamorous personality.”

And yet, in Fragments: Poems, Intimate Notes and Letters, Strasberg does, through no fault of his own, perhaps, insult the privacy of our memory of Marilyn Monroe, who indeed at once was a Hollywood icon and a deeply conflicted and complex woman, about whom Elton John, in his first version of “Candle in the Wind” wrote: “Goodbye Norma Jean/From the young man in the 22nd row/Who sees you as something more than sexual/More than just our Marilyn Monroe.”

The betrayal of trust comes not from Strasberg himself, but from his widow—his young wife Anna, who never had the deep bond with Monroe that Strasberg or his first wife, acting coach, Paula Strasberg had. It was Anna who, upon Strasberg’s death in 1982, inherited not only his possessions but those of Marilyn Monroe, who had, at the time of her death in 1962, left her estate to Strasberg—a man about whom she had said in an interview, “I think Lee probably changed my life more than any other human being.”

Because of the bond between them, she left him with the means to continue his work in the famed Actors Studio. She also bequeathed him what the editors refer to as a “large and uncataloged collection, which included dresses, cosmetics, pictures, books, receipts and so forth.”

It is left to the reader to wonder what Anna Strasberg’s reaction was when she dipped her hand into an old box and came up with a stack of Monroe’s private papers. It is left to the reader to further wonder how long it took for her to contact her “family friend” Stanley Buchthal, or how long it took Buchthal to contact his friend, “French essayist and editor” Bernard Comment to tell him of the discovery. (The reader is also left to wonder how long it will be until the dresses, cosmetics, pictures, and receipts turn up on eBay. Monroe’s books, we are told in an afternote to the book, were donated by Anna Strasberg in support of Literacy Partners.)

Would that Lee Strasberg had proved himself to be the friend that Monroe saw him to be. And would that he have protected her privacy and her memory more carefully.

Not that Fragments has nothing to offer the reader. There are, along the way, some memorable passages, such as when Monroe writes:

“My love sleeps besides me—
In the faint light—I see his manly jaw
Give away—and the mouth of his
Boyhood returns . . .”

“I see myself in the mirror now, brow furrowed—if I lean close I’ll see—what I don’t want to know—tension, sadness, disappointment, my blue eyes dulled, cheeks flushed with capillaries that look like rivers on maps—hair lying like snakes. The mouth makes me the saddest, next to my dead eyes. There is a dark line between the lips in the outline of several [illegible] waves in a turbulent storm—it says don’t kiss me, don’t fool me I’m a dancer who cannot dance.”

Saddest of all is the brief conclusion that Monroe reached upon reading a particular book: “I thought I’d try to be constructive about it and read the letters of Sigmund Freud. . . . The book reveals (though I am not sure anyone’s love-letters should be published) that he wasn’t a stiff. . . .”

Perhaps in the process of transcribing these fragments left over from a too-brief lifetime, Strasberg and company failed to notice that, unlike them, Marilyn Monroe felt that there were some papers too personal to publish. These, for instance, were.