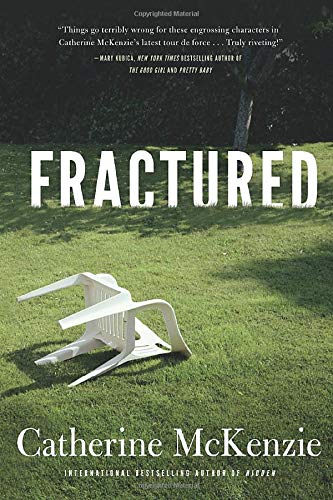 Tens of millions of Americans live in suburbs, so it’s not surprising to see so many readers gravitating toward stories that happen there. The literary crowd loved the way John Cheever wrote them. Horror fans couldn’t wait to see what Ira Levin’s Stepford Wives would look like on the screen. And thriller aficionados owe much of their appreciation for Gone Girl to the fact that sociopathic schemer Amy Dunne looks a lot like the nextdoor neighbors they spend time with every day.

Fractured, by Catherine McKenzie, also happens in a place of manicured laws and carefully laid-out streets. It’s a story about a bestselling author who moves to a tony Cincinnati, Ohio, neighborhood where she struggles mightily to make friends.

The book is written in the first person, and you can’t help sympathizing with Julie Prentice as she’s ostracized by neighbors who can’t separate their feelings about her novel from the woman who wrote it. In other words, because the book is disturbing, they think she is, too.

While all of the characters are interesting, Fractured’s plot is mostly about the setting. The neighborhood busybody succeeds in her reign of annoyance largely because people in the ’burbs tend to follow the rules. The teenage boy is caught sneaking into the teenage girl’s basement because it’s impossible to hide from middle-aged moms on their nightly walk. And the nice man and nice woman who are lured toward an extramarital affair have to act like nothing is going on during the obligatory block parties.

If you love living in a place like this, or love to hate the people who do, you’ll be engaged by the story. If you want more visceral thrills—a killer hiding behind a mask of domesticity, or the sudden unveiling of “people who are nothing like they seem”—you might be disappointed. That’s because all of the characters are exactly what they seem: normal people you’d feel obligated to be friendly with if you lived in a place like this.

This isn’t a criticism as much as an observation about this story. Throughout most of it, there is no readily identifiable villain. And although readers learn early on that something bad has happened, most of the conflict revolves around disagreements about the way children should be raised, whether or not extramarital flirtation should equate with cheating, and why these superficially pleasant suburban moms are being so mean to Julie.

The bad thing that does happen—near the very end of the story—is a traumatic event witnessed by the whole neighborhood. Because the characters are so realistically rendered, it’s completely believable but not too shocking. It’s simply a tragedy arising from neighborhood pettiness as opposed to a thrilling reveal.

Readers who had been hoping for a genuine scare may be disappointed by this, but those who simply want to see Julie evolve will be satisfied enough. Those in both camps will appreciate the structure of the story, which switches between events taking place over several months in the past to those taking place in the present as a grand jury decides whether or not a crime has been committed.

That structure is one of the smartest elements of this book. Regardless of whether readers are interested in the problems the characters are confronting, the suspense around that grand jury’s decision will ensure they stay with the story until the end.