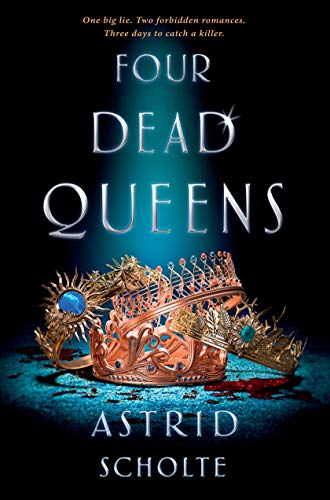 “Four Dead Queens is entertaining from start to finish.”

Keralie Corrington loves being a thief. She “dips” for Mackiel, who has been her boss and friend as long as she remembers. It is a life she would have chosen, if she had dreamed up her own future. Plus, she’s really, really good at it.

Mackiel scratched at his neck with ring-covered fingers, a nervous habit. ‘Not up for the challenge?’

I scoffed. ‘Of course I am.’ I was his best dipper, slipping in and out of pockets with a feather-light touch.”

Quadara, where Keralie lives, is a nation composed of four separate districts, ruled by four queens, one for each region. It is in this kind of rule that the country finds peace.

“Quadara’s divided nation was an ecosystem, each quadrant playing its part. Archia provided crops and natural resources; Eonia developed medicine and technology; Ludia provided art, fashion, and entertainment; and Toria arranged imports and exports between the quadrants. And Queenly Law upheld the system.”

Keralie lives in the Toria quadrant. She came to the Jetee area from the seaside, where her parents tried to make her into a sailor. She was not who they thought she should be. After a terrible accident, leaving her father in the hospital, Keralie runs away, to find a new life in the city. That is where she begins her new life of crime.

When Keralie steals some comm chips from the messenger Mackiel chose as her target, they aren’t any old chips—they document the murder of the four queens. But no one knows about the murders—no one except Keralie. Keralie, realizing Mackiel’s choice of the messenger wasn’t innocent, runs from him, knowing she can no longer trust him.

Varin, Keralie’s messenger victim, finds her at the auction house where the chips are to be sold. Together they escape from Mackiel, who wants the chips’ knowledge for himself. After arriving at his home, where she is safe, Keralie shows Varin the information on the chips. Together they decide to travel to the palace to tell administration what they know. The queens’ murderer must be caught.

Of course it is not so simple. The story turns quickly, following Keralie as she reaches the palace, sees what is happening there, and runs from the guards. Will she be able to tell what she knows, and still be free?

Four Dead Queens is entertaining from start to finish. Keralie is a likable, believable character, filled with both flaws and honor. She is smart, shrewd, and clever. It is fun and nervewracking to watch her as she attempts to both save her nation and herself. Highly recommended for young adult readers, and anyone who enjoys a fast-paced murder mystery with fantastical elements.