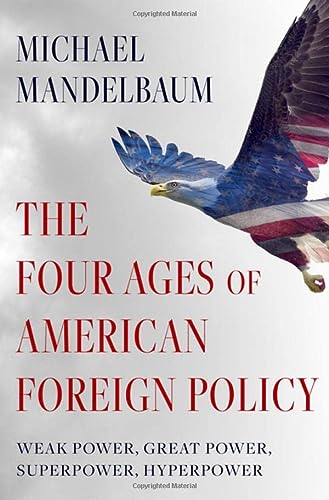 “Where Mandelbaum breaks new ground is when he discusses and assesses the serial failures of Presidents Clinton through Obama in post-Cold War geopolitics. This alone is worth the price of the book.”

The first nine chapters of Michael Mandelbaum’s The Four Ages of American Foreign Policy present a mostly conventional history of U.S. foreign affairs from our country’s founding until the end of the Cold War. Where Mandelbaum breaks new ground is when he discusses and assesses the serial failures of Presidents Clinton through Obama in post-Cold War geopolitics. This alone is worth the price of the book.

Mandelbaum divides American foreign policy into four distinct “ages” according to his assessment of the country’s relative global power position: weak power from 1765 to 1865; great power from 1865 to 1945; superpower from 1945 to 1990; and hyperpower from 1990 to 2015. The “theme” that unites these ages, he writes, is “expansion and ascent.”

Mandelbaum’s definition of power is an old-fashioned one: economic and military power and the ability to use that power to achieve foreign policy goals. He wisely refrains from the artificial “hard” power/“soft” power dichotomy that informs so many contemporary analyses of foreign policy. He is very much a foreign policy realist, though he recognizes that ideology has often played a role in U.S. foreign policy.

Like Henry Kissinger did in his masterful book Diplomacy, Mandelbaum recognizes that American foreign policy has been based on the interplay between realism and idealism—the realpolitik of George Washington and Theodore Roosevelt versus the idealism of Thomas Jefferson and Woodrow Wilson. And yet, no American president has conducted a purely “realistic” or purely “idealistic” foreign policy. This is because the American form of government allows for other officials and ultimately the American public to weigh-in on foreign policy issues.

America as a “weak power” benefited from the rivalry among the great powers of Europe. It also benefited from the services of Benjamin Franklin, whom Mandelbaum judges to be “arguably the most important diplomat in all of American history.” Franklin’s skillful diplomacy helped bring France into the War of Independence on America’s side. Indeed, our country could not have won its independence without the help of France that saw American independence as a means to weaken Great Britain.

Mandelbaum rightly praises the foreign policy of George Washington who maintained U.S. neutrality during the European wars spawned by the French Revolution. He also rightly credits Thomas Jefferson and James Polk for greatly enlarging the territory of the United States in pursuit of its “manifest destiny.”

Meanwhile, President James Monroe and his brilliant Secretary of State John Quincy Adams formulated the Monroe Doctrine to deter European powers from grabbing more territory in the Western Hemisphere—a doctrine that initially was enforced by the British Navy.

Mandelbaum also recognizes that the American Civil War had important foreign policy aspects and tremendous foreign policy consequences. During the war, President Lincoln deftly managed to steer European powers away from extending formal recognition to the Confederacy. And the Union victory in the war, Mandelbaum explains, “laid the basis for the country’s emergence as a great power” by ensuring that the United States remained united and therefore able to intervene in the three great global conflicts of the 20th century. “[T]he two world wars and the Cold War,” he writes, “were won on the battlefield at Gettysburg.”

“A country’s power in the international system,” Mandelbaum writes, “rests on the extent of its territory, the size of its population, and, perhaps most important of all, the magnitude of its wealth.” After the Civil War, the U.S. population and wealth grew exponentially. And as the second half of the 19th century came to a close, America, in the words of Alfred Thayer Mahan, began “looking outward.”

Mahan, as Mandelbaum notes, was a key intellectual proponent of American overseas expansion. His writings and advice influenced the emerging American foreign policy establishment, which included a rising political star named Theodore Roosevelt. Mahan recommended the annexation of Hawaii and the construction of an inter-oceanic canal on the Central American isthmus.

Coincident with Mahan’s writings, the United States went to war against Spain in 1898, liberating Cuba, and seizing Puerto Rico, Guam, and the Philippine Islands. America became almost overnight an imperial power. This development also coincided with Japan’s rise as a result of successful wars against China and Russia.

The United States played the role of “offshore balancer” during the First World War. President Wilson attempted to transform the war into an idealistic crusade to “make the world safe for democracy” and bring an end to great power politics. He failed. What followed in the United States, as Mandelbaum notes, was not isolationism (as so many histories claim) but a return to a “normal” foreign policy under three Republican presidents.

Mandelbaum, like most historians and scholars, has high praise for the foreign policies of Franklin Roosevelt and Harry Truman. Yet both presidents had as many failures as successes. FDR failed to adequately prepare the United States for a European war he knew was coming and an Asian war that his policies helped bring about. He was a successful war president, but his end of the war diplomacy sowed the seeds of the Cold War.

Truman’s successful European policy often overshadows his disastrous Asia policy, which included the defeat of our ally in China’s civil war, communist gains in northern Vietnam, and stalemate in Korea. And it was Truman’s Korean War paradigm that led to our defeat in Vietnam and our subsequent unwillingness in most instances to do what is necessary to achieve victory in war.

President Nixon’s foreign policy receives high marks from Mandelbaum, especially its practice of “triangular diplomacy” with China and the Soviet Union. It was classic realism, consistent with Palmerston’s sage advice that countries “have no eternal allies and . . . no perpetual enemies, [only] . . . interests [that] are eternal and perpetual.”

Mandelbaum fails to give Ronald Reagan sufficient credit for winning the Cold War without firing a shot. And he simply omits from his narrative that the national Democratic Party mostly sat out the end of the Cold War—indeed, most Democratic leaders in the 1980s, including the current President of the United States (who was then a senator on the foreign relations committee) opposed and sometimes actively resisted Reagan’s policies that undermined Soviet power.

The author is at his best, however, when he writes about the post-Cold War age of American foreign policy. The United States emerged from the Cold War as a “hyperpower,” with no peer competitor. Instead of husbanding its power and using it prudently and effectively, a series of American presidents starting with Bill Clinton squandered that power.

Clinton’s chief mistake, Mandelbaum believes, was initiating the expansion of NATO eastward after assuring Russian leaders that we wouldn’t do so. Mandelbaum believes that Clinton did this principally for reasons of domestic politics and agrees with George Kennan that NATO expansion was “the most fateful error of American foreign policy in the entire post-Cold War era.” Today Ukrainians are reaping the whirlwind of NATO expansion.

Clinton’s other mistake was to engage the U.S. military in humanitarian interventions that had nothing to do with concrete American national security interests.

Mandelbaum is equally critical of the foreign policy of George W. Bush who transformed a global war on Islamic terror after the September 11, 2001, attacks into a Wilsonian crusade for democracy with predictably disastrous results. And Bush, like Clinton, expanded NATO even farther to the east and invited Georgia and Ukraine to join the alliance. This not only further alienated Russia from the U.S. and Western Europe, but also pushed it into the arms of a rising China.

Finally, Mandelbaum is critical of President Obama’s conciliatory policy toward Iran, including negotiating the Iran nuclear deal that allowed Iran to enrich uranium and to “pursue its nuclear ambitions.” Obama also misread the so-called “Arab Spring,” which resulted not in freedom for Arab populations in Libya, Syria, and Egypt, but more instability, terror, and alienation from the United States. Obama’s overall “retrenchment” in the Middle East helped Russia grow its influence in that still important region of the world.

Mandelbaum’s ultimate verdict on the fourth age of American foreign policy is that victory in the Cold War led to American overconfidence and hubris. China and Russia are today both U.S. adversaries and their strategic partnership presents the geopolitical danger of a hostile Eurasian landmass challenging America for global preeminence. The big question presented by this book is whether we are at the end of American “expansion and ascent” and the beginning of American decline.