The Founders' Fortunes: How Money Shaped the Birth of America 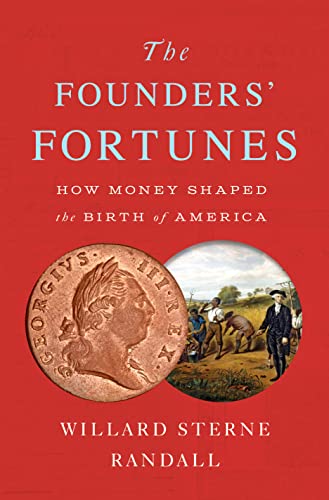 “will resonate with readers following today’s headlines about the financial interests of our governing elite and how their decisions may enrich their own pockets.”

“The business of American is business” is a famous quote and as this very timely books reveals, this has been true even before America was a nation. The author takes a unique and revealing look at the financial affairs of our country’s founders, providing an informative narrative that will resonate with readers following today’s headlines about the financial interests of our governing elite and how their decisions may enrich their own pockets.

Since the American colonies never had a landed nobility or titled gentry, nearly every American had some opportunity to improve their financial position. Relating the biographies of famous Americans like George Washington and Benjamin Franklin, it is often a rags-to-riches story about how both men grew up impoverished, but through their own efforts, and some good fortune, became not only economically well off, but turned that wealth into political power that brought them to the centers of colonial government.

However, the political and economic aspirations of these men were constantly stymied by what they considered oppressive taxation and regulation from the English Parliament. As the author lays out a crisp, fast-moving narrative, it is easy to understand how the colonists began to inexorably link political and economic freedom together.

In addition to feeling oppressed by what they considered unfair “taxation without representation,” the colonists had a number of economic grievances against the king and his ministers. The author digs into some forgotten aspects of America’s economic movement toward independence as he describes the colonists’ struggle with not being allowed to print their own currency or start their own bank, leading to constant shortages of cash and creating a nearly constant barter system. Combined with the fact that wealthy Americans like Washington and Franklin felt their ability to start business was prevented by Britain’s mercantile system of colonial monopoly and dependency it is not hard to see the path from economic to political revolutionary thought.

All of this was accelerated after the end of Seven Years War, when the removal of the French threat to incite Native American attacks on isolated western settlements and the desire of Britain to tax the colonists to pay their enormous war debt began the road to resistance, organization, and finally open rebellion of the colonies.

Of course, starting a Revolution is much easier than maintaining one, and many readers may be surprised to learn that although Britain never really came close to militarily defeating their rebellious colonies, the economic chaos that resulted from years of war almost brought the colonists to defeat by 1780. Lacking the ability to pay the troops or purchase supplies, only the timely arrival of French and Spanish gold, combined with the persuasion of the troops through promised land bounties, combined with General Washington’s occasionally harsh treatment of mutinous troops, kept the army together long enough to win the Battle of Yorktown and convince Britain to seek peace.

But even peace and independence could guarantee economic stability, and the author concludes the book with a brief summary of the economic stimulus for the Constitution and the critical decision of the new Washington Administration to finally seek a way to federally assume the new country’s enormous war debts and begin moving the new country to economic growth.

Of course, along the way, many founders increased or rebuilt their fortunes lost or diminished during the war, but not all of them. As the author states, after the founders wrote their famous ending to the Declaration of Independence—“We Mutually Pledge To Each Other Our Lives, Our Fortunes, And Our Sacred Honor”—many of them did indeed make enormous sacrifices, some ending their lives destitute.

This is a very timely and insightful book, coming at a time when Americans are asking many questions about the business dealings of legislators and government officials, and whether their personal fortunes are driving their governing decisions or the common good of the people. As the author details, like many political issues, this is not unique to our times, but is part of a long-running debate on what is meant by public service, what kind of people should be running our government, and how often we find that our elected officials may put their own interests first.