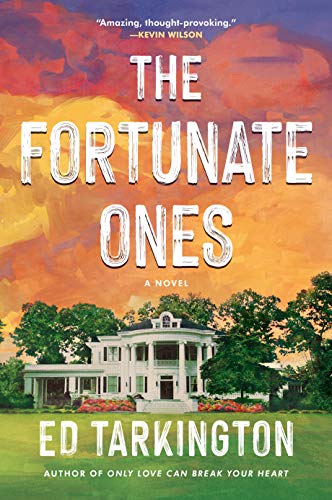 “The Fortunate Ones is a fathoms-deep exploration of love, loyalty, and the ties that bind, written masterfully from all angles. It’s a laser-sharp look at the underbelly of power and privilege’s repercussions as told through the power of story.”

A gorgeous, deep probing treatise on the myriad manifestations of love, envy, privilege, and longing, The Fortunate Ones by Ed Tarkington begins by holding a mirror to coming of age concerns in light of two young men from disparate backgrounds who overlap in a setting where all that glitters isn’t gold.

Narrator Charlie Boykin comes from nothing and knows no difference. Born to fifteen-year-old, unwed Bonnie, who is fallen from family grace and left to fenagle reduced circumstances, he lives in the integrated projects of East Nashville until a twist of fate lands him at The Yeatman School, an elite boy’s school dedicated to educating those from the opulent side of Nashville.

Spared the harrows of being a fish out of water, Charlie is assigned a “big brother” in golden boy, Arch Creigh, who takes him under his wing and pulls him into the upper echelon of moneyed Nashville, where his life is set on a new axis. Charlie says of being in the charismatic Arch’s orbit: “In the deep silence of those still mornings, the world’s vastness became present and visible. I understood what people meant when they talked about having ‘a religious experience.’ In my imagination, it was Arch, not God, to whom these things belonged, who made me feel both sublime peace and joy.”

The imposing Jim Haltom is like a father to Arch, whose own father died when he was young. Self-made and nuveau riche, he lives in a columned house on Nashville’s Belle Meade Boulevard. He is father to fraternal twins, Vanessa and Jamie, and husband to society maven, Cici, who teeters when drunk. With influential ties to The Yeatman School, Jim extends a type of mentorship to Charlie, similar in paternal nature to that which Arch enjoys. In time, Jim Haltom’s magnanimous reach includes Charlie’s mother, who leaves her waitressing job in East Nashville to accept the position of Cici’s live-in personal assistant, and soon the families are symbiotic, in a dynamic verging on incestuous.

What begins in star-struck naivety falls prey to the complications of hero worship as Charlie tumbles headlong into Arch’s multifaceted, entitled world only to find himself in love with Arch’s girl, the aloof Vanessa, and enmeshed with people leading dubious, double lives. Arch explains the well to do’s hypocrisy to Charlie: “Down deep, most people are pretty awful. Still, we spend half our lives pretending we’re better than we really are.”

Duplicity abounds when Charlie learns the true reason behind his elevation from rags to riches. Disillusioned and mistrusting of all who kept the secret of his mother’s affair with Jim Haltom, Charlie follows the trail of his Yeatman art teacher and relocates to Mexico to begin a new life as a painter, while Arch marries Vanessa and, after enjoying a prosperous life in New York, the couple returns to live large in Nashville.

Comfortably settled in the rhythm of Mexico, Charlie’s life seems on track until Arch arrives unannounced to tell Charlie his mother is gravely ill. As Charlie heads back to Nashville, he reflects, “I felt as if everything about my life since I got off the bus in San Miguel ten years before had been one long, listless dream, that the life I’d thought I’d been building was always temporary, an illusion, something I’d invented to cover up that ceaseless longing, and I’d just been waiting for Arch to wake me up so I could go on living.”

Desirous of reconciling with his dying mother, who is now married to Jim Haltom, Charlie does not intend to remain in Nashville, but his plans are derailed when he receives countless, local painting commissions, and in short order, the story deepens as Charlie succumbs to the magnetism of Arch, who intends to run for office as mayor of Nashville and pleads for Charlie’s assistance.

There is growth in The Fortunate Ones from early 1970s to present day. Author Ed Tarkington hits the high notes of Nashville’s explosion from a sleepy, Southern town to the modern-day politics in play under the guise of maintaining “the spirit of Nashville.” While the ambitious Arch endeavors to be a significant part of the city’s evolution, Charlie seizes the opportunity to tend to the neglected Vanessa, and although Arch has his own divergent agenda, he glibly notes Charlie is playing house with his wife.

The Fortunate Ones is a fathoms-deep exploration of love, loyalty, and the ties that bind, written masterfully from all angles. It’s a laser-sharp look at the underbelly of power and privilege’s repercussions as told through the power of story.