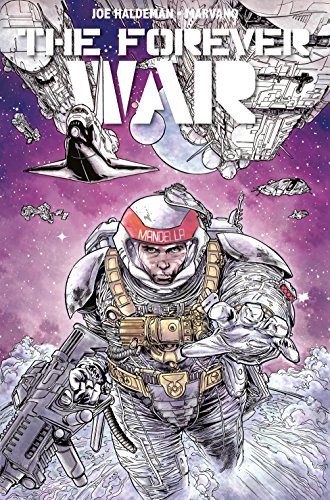 The traditional format novel The Forever War was first published in 1974. It won the coveted Nebula, Hugo, and Locus awards. The novel became a series and was adapted into a play. A movie based upon the novel has been in development since 2008 and seems lost in time dilation. The original novel reads as fresh today as if it returned to earth through its signature concept of collapars travel. The effort to convert the novel into graphic format was obviously a herculean and sadly, a largely wasted effort.

The original novel was 236 pages long, all written dialogue. The graphic adventure is 144 pages long. The clear original narrative of the novel has been shrunk to captions supporting the graphic art. The art itself is fulsome and intense.

Unfortunately, it converts vivid imagination created by author Haldeman’s crisp original writing into fixed, often confusing images. The story becomes lost in the storyboards. One hopes that if a movie ever comes from the original novel, it plots a more engaging interstellar course.

The subject of The Forever War is an interplanetary war between two cultures with no understanding of each other. The story is generally told through the eyes of a human culture. Their enemy is a culture that turns out to be clones that can bleed and die in the same fashion as humans. For the respective forces to reach each other over the light years logistics, logistics, and more logistics are required. The war lasts over 1100 years as measured on earth. For each hour of these 1100 years, 59 minutes is spend in tedium of preparation and travel. One minute of each hour is spent in the frenzy of battle. This graphic novel unintentionally mirrors that hourly composite.

The tedium of the graphics in the novel has multiple examples. One fight sequence consumes more than two pages. Images of the fight are lodged sideways, upside down, and interspersed with frankly bewildering drawings of figures and scowling faces irrelevant to the conflict. The dialogue is reduced to single word shouts of “Die!” and injected sound effects such as “Whack.” The fight ends with no segue to an alien landscape of steaming blue waters with the surrounding wind carved pillars of rock spouting what later turns out to be human dialogue discussing the fate of the soldier who instigated the fight. The humans conducting this dialogue are surprisingly rock-like themselves as they discuss how and by whose hand the murder-minded soldier should be executed.

The graphic novel has no foreword or other explanation of how it seeks to adapt the classic science fiction novel to comic format. The slow growth of story line information provided by traditional prose is absent. In an effort to provide necessary background information to the reader, at the outset, the drawn panels are stacked on top of each other. On pages five through eight, there are an incredible 51 panels of art and two panels of prose placed end to end. The net effect is reader frustration. That emotion is best illustrated by a panel near the end of the run which depicts a Donald Duck style character literally “wack, wacking” itself over some undisclosed frustration of its own.

The zenith of The Forever War is found with its graphic portrayal of war. And graphic means graphic. There is no subtle depiction of injury and death, which are the universal results of war. The red ink is undiluted, bright, and fresh on the pages drawn to visualize battle scenes, training accidents, and recreational leave gone awry.

The ultimate irony of the war is that the humans convert themselves to clones. Thereafter clones can communicate with clones to end the war with a whisper, not a missile. Organic humans become obsolete, but not fully extinct. Fade the graphics to a universe of silent stars.