The Forever House (Fiction Without Frontiers) 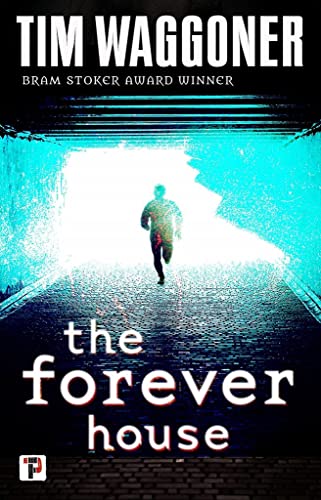 “This is top rate action/adventure horror with the right amount of humanity to keep the reader’s attention from cover to cover.”

The concept is simple enough: a family of supernatural beings called the Eldreds roll into a nice suburban neighborhood, buy a house, and bad things begin to happen to their neighbors. Similar tropes have been used in several different vampire novels.

This is the premise of Bram Stoker Award winning author Tim Waggoner’s newest venture into horror, The Forever House, a book that combines the macabre mind of Stephen King with the action/adventure punch of Matthew Reilly.

Most horror novels build slowly, like the flavors of a good pot of chili, so they can develop the creep factor, dial it up to eleven. Waggoner decides to rub the reader’s face into the horror aspect from the get-go, offering a no-holds-barred look at what’s to come, slapping the reader with action and mayhem with very little rest in between.

The Eldred family—Father Hunger, the Werewife, Nonsister, The Low Prince, and Grandother—feed on negative human emotions with the help of their servant Machine Head and the living vehicle, Car. They move into a new neighborhood, use their magic to entice people to a little get together (such as a barbeque), reading their minds to find out what makes them tick and then, later, cast spells to lure them into the Eldred’s house.

Once inside the house, which has been enlarged on the inside to include whole worlds, the poor humans must endure shock, horror, and pain to provide the necessary sustenance for the Eldreds’ insatiable appetites.

With plenty of character buildup, holding back from the edge of too much, the author introduces the protagonists, warts and all. From Spencer, a budding pedophile in the making, to Martin, a belligerent blue collar worker suffering from a gambling addiction, each character is written with precision and purpose, allowing the reader to become appropriately invested into each one. While not a wordsmith of Stephen King’s level, Waggoner shows that he’s on the way to getting there.

While there are many horror aspects to the book, it reads more like a mixture of science-fiction/fantasy, but that doesn’t detract from the fact that it is indeed part of the horror genre. What happens to the victims definitely places the work spot-on into that category.

There is plenty of action to rocket the story forward, and Waggoner doesn’t spare the horror, drenching the reader with the protagonist’s pain and the otherworldly grotesques that the Eldreds conjure. With judicious switching from the third-person omniscient to present-tense omniscient, Waggoner skillfully guides the reader through the minds of both the protagonists and the antagonists. This is top rate action/adventure horror with the right amount of humanity to keep the reader’s attention from cover to cover.