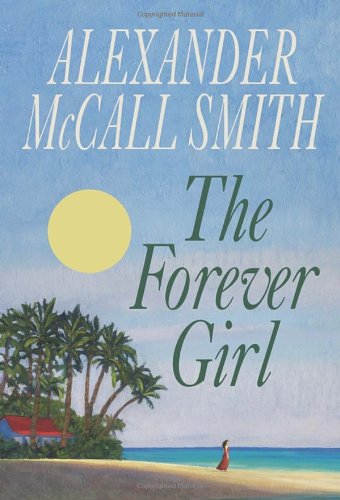 “Nothing ventured, nothing gained—but in venturing, all could be lost. Some people just can’t accept that risk, and Clover is one of them.”

Through more than 50 books, Alexander McCall Smith has reliably delivered stories about being human—our foibles and delights, our loves and sorrows—no matter where we live or what we do.

Mainly these have been through four series, but occasionally he pops out a standalone novel such as The Forever Girl.

This story concentrates on the wonder and melancholy of love. It is much more melancholy than his other works, because it studies the reality of love, which is often unfulfilled or unrequited.

In fact, the title (a rather plain one, uncharacteristic from an author who specializes in clever, original titles) might more appropriately be Love Hurts, because of this:

“[T]here’s an expression that people bandy about: love hurts. It sounds like one of those things that people say without thinking because they’ve read about it somewhere, or heard it in a song. But those things are often true, even if they sound corny and over-used. Love really does hurt. It hurts when you realise how much you love somebody. It hurts whether or not that person loves you back and everything goes well, or whether they don’t and they ignore you or treat you badly. It just hurts, because that’s the way love works.”

That about covers it.

The story is told through two points of view: young Clover, the forever girl (“Whoever is up there in the sky looked down on me and said—‘It’s forever for you’”), and her mother, Amanda. While Amanda falls out of love with her husband and tiptoes toward an affair without ever actualizing it, her daughter at six years old finds the love of her life in her mother’s not-lover’s son, James.

“James made everything seem special, as if the sheer fact of his presence cast a light upon what was around him that was simply not there in his absence.”

Initially her best friend, James grows up to seem indifferent to Clover, causing her an adolescence and young adulthood of angst. Her challenge in life is to learn how live without the one she loves more than anything.

She can’t say he broke her heart, because there was never a togetherness to fracture. Her longing takes her into deep philosophy, and ultimately a deep understanding of her mother.

The novel glows with evocations of place as well as secrets of the heart—a combination this author excels at. Armchair travelers will feel they’ve visited the Cayman Islands and Scotland, in particular. Clover never truly finds a home in either, or Australia or Singapore, where she follows in James’s footsteps.

Throughout her globe-hopping, she is repeatedly encouraged by friends to make her love known to him. But she suffers a pride and insecurity that hold her back. A moral to the story emerges from her reticence, about not letting love go unspoken. It could be expanded to life in general: Nothing ventured, nothing gained—but in venturing, all could be lost. Some people just can’t accept that risk, and Clover is one of them.

But then, well . . . life is full of surprises, Mr. Smith reminds us—and Clover gets one to close her story.